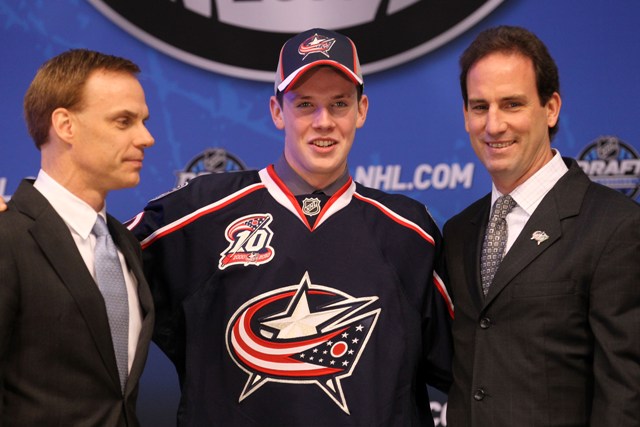 With so many Winterhawks players off at NHL rookie camps and training camps, we’re taking a look at how they’ve fared so far.

The annual NHL prospects tournament in Traverse City, Michigan has wrapped up with numerous Winterhawks having made a mark in the tournament.

Two current Winterhawks played for the Columbus Blue Jackets’ entry, with Ryan Johansen picking up a goal and two assists in three games, while Oliver Gabriel had one goal and one assist in four games. Johansen was taken fourth overall by the Blue Jackets in the 2010 NHL Entry Draft, while Gabriel was attending on a free agent tryout. NHL.com looks at Johansen’s play in the tournament in this article.

Along with Johansen and Gabriel, Chris Francis suited up and led the team with four points in four games. Francis completed his career with the Winterhawks last season, leading the team in scoring and getting MVP honors in his final season. Despite the presence of Johansen, Gabriel and Francis, the Blue Jackets were 0-4 in the tournament. All three players will be part of the Blue Jackets’ main training camp.

The Hawks were also represented at the tournament by captain Brett Ponich, who played four games for the St. Louis Blues. Ponich was taken by St. Louis in the second round of last year’s draft. Ponich and his fellow Blues prospects went 2-2. Ponich will be attending the Blues’ main camp.

In addition, Brad Ross made an impact for the Toronto Maple Leafs’ rookie team and earned an invitation to the team’s main training camp, which begins Friday. The Toronto Star profiled Ross in an article this week.

As Winterhawks fans know, Tayler Jordan isn’t afraid to stick up for his teammates, and as canucks.com notes, he’s using those skills to earn an invitation to the team’s main camp. Jordan has been playing with Canucks prospects in the Young Stars Tournament on a free agent tryout. Spencer Bennett has also been suiting up for Calgary’s entry in the same tournament.

Two Winterhawks, Luke Walker and Tory Rutkowski, were taken two picks apart in the fifth round of the 2010 Draft, and both will be part of the Avalanche’s camp that opens Friday, while the Buffalo Sabres announced Thursday Riley Boychuk has been invited to the main camp.

Mac Carruth and Taylor Peters are back with the team after stints in Chicago and Pittsburgh, respectively, while Taylor Aronson is in Nashville with the Predators, but not participating in practice while he recuperates from shoulder surgery.