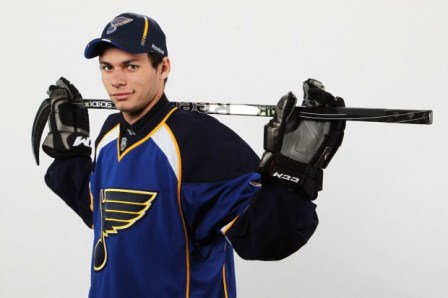 Portland Winterhawks forward Ty Rattie has signed a three-year entry level contract with the St. Louis Blues. He was drafted by the Blues in the second round of the 2011 NHL Entry Draft, 32nd overall. Rattie will be entering his 19-year-old season in 2012-13, meaning he will return to the Winterhawks if the Blues don’t keep him on their regular season roster.

In 207 regular season games over four seasons, Rattie has 103 goals and 135 assists for 238 points, 16th in franchise history. He’s added 30 goals and 29 assists for 59 points in 55 career playoff games, with the 30 postseason goals a franchise record.

With 57 goals, Rattie became Portland’s first 50-goal scorer since Josef Balej had 51 in 2001-02, and was the most by a Winterhawk since Lonny Bohonos had 62 goals in 1993-94. He was also the first Winterhawk to reach 100 points since Todd Robinson in 1997-98. His terrific season earned him a spot on the Western Conference First All-Star Team.

Rattie’s 33 postseason points were second only to linemate Sven Bartschi in WHL playoff scoring. Along with setting a new franchise record with 30 career playoff goals, Rattie also tied a team record with 19 goals in one playoff year. Rattie was also named Most Valuable Player of the Western Conference Finals.

“Ty continued developing all season and really took charge in the playoffs. He’s proven he is an elite player at our level. We’re excited for him that he’s signed with the Blues,” said Portland Winterhawks General Manager & Head Coach Mike Johnston.

“I’m really excited to sign with the Blues and take another step towards achieving my dream of playing in the NHL,” said Rattie. “It feels great to sign a NHL contract but I still have a lot of work ahead of me, and I’m committed to doing whatever it takes to reach the next level.”

Season tickets for the 2012-13 season are on sale now. Visit winterhawks.com or call 503-236-HAWK to make sure you catch all the action.