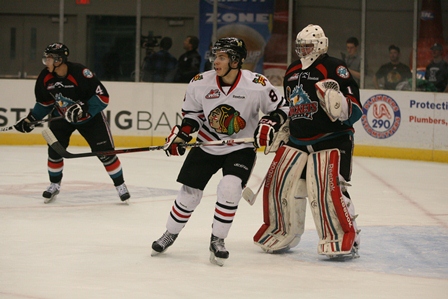 Ty Rattie scored four goals as the Portland Winterhawks completed a first round sweep of the Kelowna Rockets with a 5-3 road win Thursday.

The Hawks now advance to the second round of the playoffs to take on the Kamloops Blazers. Portland has home ice advantage in the series, which begins next Friday, April 6 at 7 p.m. in Veterans Memorial Coliseum. Game 2 will be Saturday, April 7 at 7 p.m. also in the Coliseum.

Tickets are available now for both Game 1 and Game 2 of the Kamloops series.
You can purchase
Rattie’s four goals gave him his second hat trick of the series after scoring three times in Game 1. He leads the WHL with 10 goals and 13 points in just four games of postseason play thus far. His 10 goals also surpasses the nine goals he had in 21 playoff games last year.

Rattie started the scoring when he struck 4:06 into the game to give Portland an early 1-0 lead. After Kelowna’s Madison Bowey tied the game at the 17:34 mark of the first, Rattie struck again with under a minute to play in the period to give the Hawks a 2-1 lead going into the second period.

Kelowna’s Brett Bulmer tied the game with a power play goal 2:27 into the second to tie the game at 2-2, a score that would last through the end of the frame.

Rattie completed the hat trick when he scored on a breakaway 1:28 into the third to give Portland a 3-2 lead. The Rockets continued battling, and tied the game once again when Myles Bell scored at the 7:33 mark to make it 3-3.

Portland once again took a lead, as Taylor Leier scored on a deflection at the 13:05 mark to put the Hawks up 4-3. With under a minute to go, Rattie notched his fourth of the game into an empty net to give the Hawks a 5-3 win and four-game sweep.

Along with Rattie’s four goals, his Linemates Sven Bartschi and Marcel Noebels added to their own scoring totals, as Bartschi’s 11 points is third among WHL players in the playoffs and Noebels is tied for sixth with eight points.