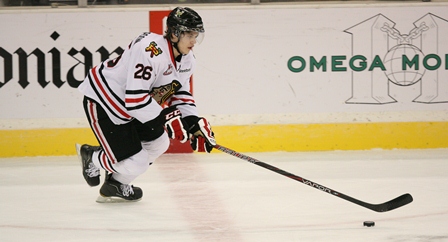 They’re three of 37 players invited to the camp, from which Team Canada will select their roster for the 2013 IIHF World Junior Championship, set for December 26 – January 5 in Ufa, Russia.

Pouliot, drafted eighth overall by the Pittsburgh Penguins in the 2012 NHL Entry Draft, leads all Winterhawks defensemen in scoring and is tied for third among all WHL defensemen with 25 points in 27 games.

Rattie, drafted in the second round, 32nd overall by the St. Louis Blues in the 2011 NHL Entry Draft, is second in team scoring and fourth overall in the league with 42 points in 26 games.

Wotherspoon, drafted in the second round, 57th overall by the Calgary Flames in the 2011 NHL Entry Draft, leads the WHL with a +34 rating, six ahead of teammate Nic Petan and 10 ahead of the closest non-Winterhawk. Wotherspoon also has 19 points in 25 games.

Following the selection camp, the players who make Canada’s National Junior Team will depart for Europe on Dec. 15, and play in two pre-competition games in Helsinki prior to the 2013 IIHF World Junior Championship.