THE ROAD TO THE MASTERCARD MEMORIAL CUP

Here’s a look at the three CHL League Championship series’, and the battle for the three Memorial Cup berths:

WESTERN HOCKEY LEAGUE
The Portland Winterhawks captured the Ed Chynoweth Cup as WHL Champions on Sunday, May 12th, defeating the Edmonton Oil Kings 5-1 in Game 6 of the 2013 WHL Championship series in Edmonton, AB.

19-year-old forward Ty Rattie, a St. Louis Blues prospect, was named the MVP of the 2013 WHL Championship series.  The Airdrie, AB, product scored a hat trick in the Hawks’ championship-clinching win on Sunday, giving him a whopping 20 goals and 36 points in 21 games.  Rattie also set a new WHL record for career playoff goals by netting his 48th, 49th and 50th post-season goals in Game 6.

ONTARIO HOCKEY LEAGUE
The London Knights and the Barrie Colts are currently in the midst of a heated Ontario Hockey League Championship series for the J. Ross Robertson Cup and the OHL berth in the 2013 MasterCard Memorial Cup tournament.

The Knights, the defending OHL Champions, have rallied back from a 3-1 deficit in the series to tie it up and send the series to a seventh and deciding game on Monday night in London, ON.   Ryan Rupert scored twice, including the overtime winner, on Saturday night in Barrie, ON, to earn the Knights the win in Game 6 and force a game 7 showdown.

The Colts have been led by Winnipeg Jets prospect Mark Scheifele, who has scored seven goals and 14 points over the first six games of the OHL Championship series.  Scheifele has been held to just two points, both assists, over the last two games of the series in which his Colts lost to the Knights.

QUEBEC MAJOR JUNIOR HOCKEY LEAGUE
The Halifax Mooseheads are off to the 2013 MasterCard Memorial Cup tournament after defeating the Baie-Comeau Drakkar in five games to win the QMJHL Championship.  It’s the first President Cup title for the Mooseheads’ franchise.

The Mooseheads, led by the duo of Jonathan Drouin and Nathan MacKinnon, plowed their way through the QMJHL playoffs, posting a 16-1 record, with their only loss coming in Game 3 of the QMJHL Championship series to Baie-Comeau, and outscored their opposition 90-36 in the process.

Drouin led all players in post-season scoring with 35 points in 17 games while MacKinnon and Czech forward Martin Frk each has 33 points.  MacKinnon and Drouin are two of the top three prospects for the 2013 NHL Draft.

The Mooseheads will now head to Saskatoon to battle in their first MasterCard Memorial Cup tournament. 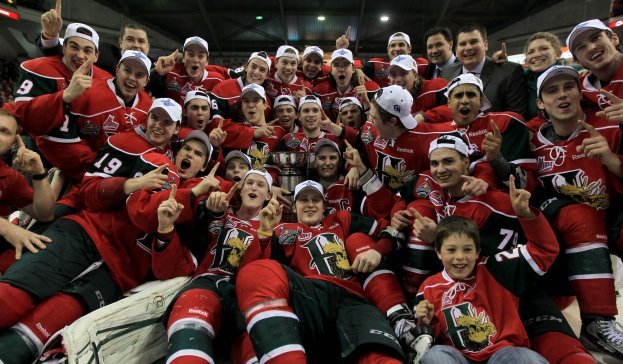