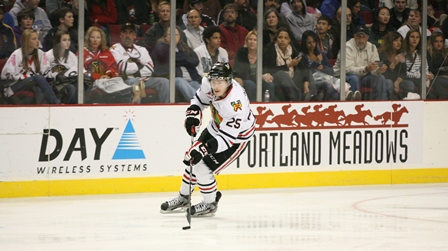 One of the most gratifying aspects of being a junior hockey fan is watching the players grow up right before your eyes. They arrive as baby-faced kids living away from home for the first time, and eventually leave as young adults.

The connection is even stronger for the rare players who spend their junior career with one team, and play out their entire eligibility.

Winterhawks center Taylor Peters has a good chance of completing that cycle this season. After a cameo appearance as a 15-year old, he arrived for good as 16-year-old, with just a half-season sojourn in the BCHL at 17 breaking up his time in Portland.

And while there remains a chance he could sign a pro contract in the coming weeks and move on, Peters is preparing for the upcoming season as if he’ll be spending his 20-year-old year here with the Hawks.

“Coming into the league as a 16-year-old you look to the future and you think about how long your career’s going to be in junior, and then you wake up one day and it’s your last year,” he said.

But the 2012-13 season won’t just be a 72-game victory lap for Peters. He’s coming in with two critical goals: help the Hawks win a championship after two straight trips to the final, and improve his stock enough to earn a professional contract.

On the latter point, Peters attended two NHL development camps back-to-back over the summer, first with the Florida Panthers, then with the San Jose Sharks. It’s the third straight season he’s attended such camps, after going to Minnesota’s last year and Pittsburgh’s in 2010. Those experiences have given him a taste of what he needs to do to advance to the next level.

“Last year with Minnesota when I got that opportunity to play, it’s definitely given me a gauge on where my game should be if I want to make that next step,” he said.

To get there, Peters will be looking to put up another strong season and help lead the team back to the final. With many familiar faces expected to move on this year, and the influx of young talent joining the team, it will be a new-look Winterhawks squad.

“It’s a shame guys have to leave, but it’s a valuable and necessary step they have to take to get to the next level. And with the new guys it brings fresh faces and new potential to the team,” he said. “We had 16-year-olds last year who had good experience, and that first year is so important. We have guys like Chase De Leo and Nic Petan, both guys that put up very good numbers for 16-year-olds and guys who will take a big step offensively for us this year.”

As for Peters, he will continue to be one of the team’s unsung heroes- killing penalties, shadowing another team’s best player, winning battles along the boards all while also giving the team some offensive depth.

But each game this season will make it one game closer to the end of Peters’s tenure in Portland. For all intents and purposes, Peters has grown up in Portland, and it’s left an indelible impression on him.

“Going from 15 (years old) to 20 is a pretty big difference, and it’s definitely left a mark on me, the culture around here, the fanbase,” he said. “Just walking around downtown sometimes on my days off it’s a phenomenal sight to see. It’s a really beautiful city, it’s well-kept, it’s easy to get around and it’s definitely one of the better cities in the world.”

And going into his last year here, it’s a city he desperately wants to deliver a championship to.