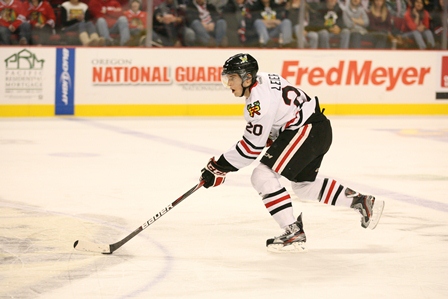 Leier, 19, is in his third season with the team. He has six points through the first four games of the season, after posting a career-high 62 points in 64 games last season. In 140 career games with the Winterhawks, Leier has 42 goals and 63 assists for 105 points.

He was a fourth round pick, 117th overall, of the Philadelphia Flyers in the 2011 NHL Draft, and was signed by the Flyers earlier this month. The Winterhawks selected Leier in the second round, 24th overall, of the 2009 WHL Bantam Draft.

“Taylor is one of our hardest working players both on and off the ice, and is a very good role model for our younger players,” said Johnston. “I believe it is key that the captain has the respect of the team and Taylor definitely has that.”

“It’s a great honor to be named captain of the Winterhawks,” said Leier. “I’m eager to embrace the responsibility and do whatever I can to lead the team as we try to repeat as champions.”

He becomes the 39th captain in team history, joining such players as Braydon Coburn, Adam Deadmarsh, Paul Gaustad, Brenden Morrow and Brent Peterson. He takes over the captain’s position from Troy Rutkowski, who has graduated from the league.