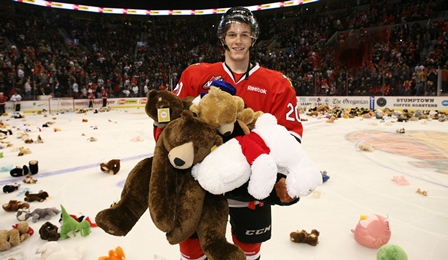 It didn’t take long for the teddy bears to come flying, as just 3:24 into the game Leier beat Seattle netminder Brandon Glover to bring 12,814 stuffed animals flying onto the ice. The bears will be donated to various children’s charities next week.

After the animals were taken off the ice, Leier struck again for his second of the game at the 5:01 mark to put Portland ahead 2-0. Seattle then replaced starting netminder Brandon Glover with rookie Danny Mumaugh, who was making his first WHL appearance, and the game remained 2-0 through the end of the period.

Hawks defenseman Derrick Pouliot made it 3-0 four minutes into the second when he rushed the length of the ice with the puck and went top shelf over Mumaugh’s shoulder on a terrific individual effort, in what was the only goal of the period.

Seattle got on the board 1:17 into the third on a goal by Michal Holub, but the Hawks got that one back when Taylor Peters scored at the 6:31 mark to make it 4-1. The Thunderbirds got a late goal from Alexander Delnov to make it 4-2, but that was as close as Seattle would get.

Mac Carruth earned the win in net for Portland, with 25 saves on 27 Seattle shots. After Glover allowed two goals on four shots early in the first, Mumaugh finished with 29 saves on 31 shots.

The Hawks wrap up three games in three nights tomorrow in Everett at 5 p.m., then play their last game before the holiday break Tuesday in Spokane.