Seth Jones #1 In Final Rankings; One of 4 Hawks on List 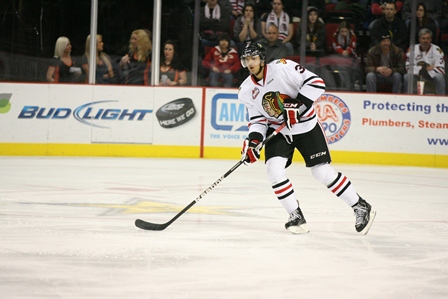 Joining Jones on the rankings are forwards Nic Petan at #33, Oliver Bjorkstrand at #36, and Brendan Burke coming in at #13 among North American goalies.

“Seth has had a terrific season, and is well-deserving of being ranked first by Central Scouting,” said Portland Winterhawks Acting Head Coach Travis Green. “Nic, Oliver and Brendan have also elevated their play as the season has progressed, and I’m excited for all four players for being honored by Central Scouting.”

Jones is the Western Conference nominee for the WHL’s Rookie of the Year Award after posting 56 points in 61 games in the regular season, first among the league’s rookie defensemen, and he has 10 points in 13 playoff games. Jones also led the United States to a gold medal at the World Junior Championship.

Petan was a co-winner of the WHL’s Bob Clarke Trophy along with teammate Brendan Leipsic as the duo tied for the league lead in scoring with 120 points each. His +68 rating also led the WHL, and Petan currently has 18 points in 13 playoff games.

Bjorkstrand led all WHL rookies in both goals (31) and points (63) this season in 61 games, and has 14 points in 13 postseason games. He also represented his native Denmark in Division I of the World Junior Championship.

Burke set career-highs across the board in his second season, with a record of 24-5-1-0, a goals against average of 2.65, save percentage of .908 and four shutouts.

Group ticket packages for the 2013 WHL Playoffs are now available. Contact the Winterhawks today at 236-HAWK or email seats@winterhawks.com for details.