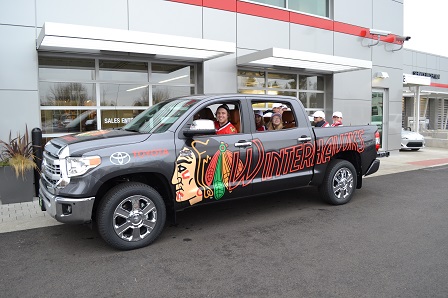 The Portland Winterhawks have teamed up with Portland Metro Toyota Dealers to search for the Hockey Family of the Year in Portland and Southwest Washington, with a one-year lease on a 2014 Toyota Highlander going to the winner.

It begins Saturday with Toyota Hockey Family Day, when Winterhawks players and Rosebuds dancers will be visiting 11 Toyota dealerships throughout the day. At those appearances, families can enter to win to become the Toyota Hockey Family of the Year, and the first 25 people to take a test drive at each dealership during the player appearances will be Toyota’s guests at a future Winterhawks game.

Of all the entries received, 11 families will be chosen as finalists, with fans then able to vote online on who they think is the Toyota Hockey Family of the Year. All 11 families will receive tickets to the Winterhawks game on February 22, with the winning family to be named in an on-ice presentation that night. Whether your family has hockey players, are involved in hockey or are just big fans of the game, the Winterhawks and Toyota want to hear your story.

“Toyota is a great supporter of youth hockey in Portland and Southwest Washington, having signed on this season as a major sponsor for the Junior Hawks,” said Portland Winterhawks President Doug Piper. “We’re excited to partner with them to find the Hockey Family of the Year, and look forward to visiting 11 dealerships to help promote youth hockey in the area.”

Fans who can’t attend the event on the 25th can also enter the contest now at winterhawks.com/Toyota. The times and players appearing at the Toyota dealerships are available on the website. Fans should keep checking winterhawks.com/Toyota for updated information. The entry deadline is 11:59 p.m. on Saturday.