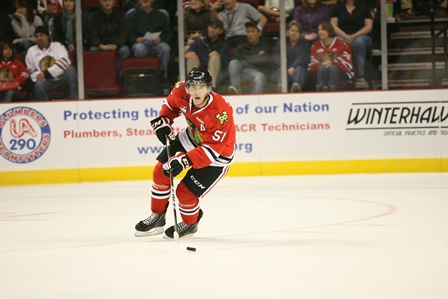 Pouliot has six goals and 23 assists for 29 points in 41 games this season, tying him for 12th among all WHL defensemen. As a rookie last season, he had 30 points in 66 games. The Winterhawks drafted Pouliot with the top overall pick in the 2009 Bantam Draft.

Leier, a left winger, has eight goals and 11 assists for 19 points in 41 games in his rookie season. The Winterhawks drafted Leier in the second round of the 2009 Bantam Draft.

Hanson, a defenseman, has nine assists in 41 games this season. As a rookie last year, he had one goal and two assists for three points in 43 games. The Winterhawks drafted Hanson in the eighth round of the 2009 Bantam Draft.

The 2012 NHL Entry Draft is scheduled for June 22-23 in Pittsburgh. The Winterhawks have had 12 players taken in the last two drafts, including four first rounders.

Winterhawks Easy Rose Garden Parties are now available and include 10 VIP Club Level seats, 10 limited edition Winterhawks hats and 10 Skibowl lift tickets for only $195 – a $1,000 value. This limited time offer presented by Skibowl provides $100 worth of fun, hockey and skiing per person for only $19.50. Call 503-236-HAWK or e-mail seats@winterhawks.com to get your Easy Rose Garden Party package today.