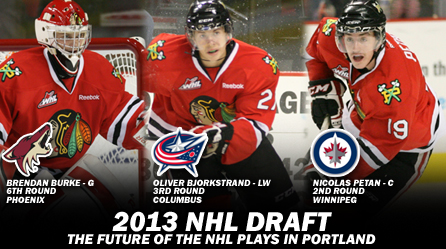 Petan went in the second round, 43rd overall, to the Winnipeg Jets, Bjorkstrand was drafted in the third round, 89th overall by the Columbus Blue Jackets, and Burke was selected in the sixth round, 163rd overall, by the Phoenix Coyotes.

Petan had an outstanding sophomore season for the Winterhawks, as he and linemate Brendan Leipsic led the WHL with 120 points apiece. He went on to add 28 points in 21 playoff games, second in the WHL only to linemate Ty Rattie, to help lead the Winterhawks to the championship. Petan then placed third in scoring with 10 points in the MasterCard Memorial Cup. He was named to the WHL’s First All-Star Team and shared the Winterhawks’ Most Valuable Player Award with Leipsic.

Bjorkstrand led all WHL rookies with 31 goals and 63 points in 65 regular season games, and also led all first-year players with 19 points in 21 playoff games. The Danish rookie then added three points in five games in the MasterCard Memorial Cup. Bjorkstrand shared the Winterhawks’ Rookie of the Year Award with Seth Jones.

Burke was terrific in his second season with the Hawks, compiling a record of 24-5-1-0 with four shutouts, a goals against average of 2.65 and 90.8% save percentage.

“Being drafted is a dream come true for all players, and we’re very excited for Nic, Oliver and Brendan. Nic exceeded all expectations in his second season, sharing the league lead in scoring while improving all facets of his game,” said Portland Winterhawks General Manager & Head Coach Mike Johnston.

“Oliver adapted immediately to the WHL after coming over from Denmark and had a great season, leading all WHL rookies in scoring. And as expected, Brendan really stepped up this season with 24 wins and four shutouts in 33 games. He definitely has a bright future ahead of him,” continued Johnston. “All three are terrific players who played significant roles in our championship season.”

Premier membership season tickets and 20-game plans, starting at only $37 per month, for the 2013-14 season are on sale now and include playoffs. Visit winterhawks.com or call 503-236-HAWK to reserve the best seat locations.