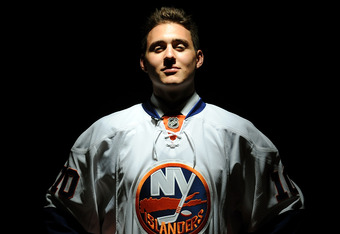 Niederreiter is currently attending the Islanders’ training camp, and last week had a goal in a preseason prospects game against the Boston Bruins.

“This is a great achievement for Nino, and we’re very happy for him. By all accounts he’s been having a great camp for the Islanders and we’re sure they’re very excited about his play,” said Portland Winterhawks General Manager & Head Coach Mike Johnston.

Niederreiter became the highest-drafted Swiss player of all-time when the Islanders took him fifth overall. He represented his country at last year’s World Junior Championship, leading Switzerland to the semifinals with 10 points in seven games and earning a nod on the tournament all-star team. He was also part of Switzerland’s world championship team and played in the Canadian Hockey League’s Top Prospects Game.

The Winterhawks traded up in the 2009 CHL Import Draft to select Niederreiter second overall. He led Portland with 36 goals in the 2009-10 season, becoming the first Winterhawk with 30+ goals since 2004-05, and he finished with 60 points. His 36 goals were second among all WHL rookies, he tied for the league lead among rookies with six game-winning goals, tied for third among first-year players with 11 power play goals and his 60 points ranked seventh among rookies. His 36 goals, 11 power play goals, six game-winning goals and two overtime goals all led the Winterhawks and his 60 points was fourth on the team.

Niederreiter also led the team with eight goals in the playoffs, and finished second on the team with 16 points in the postseason. His eight playoff goals tied for the league lead among rookies.

Season tickets for the 2010-11 season are on sale now. Prices start at just $10.50 per game while a limited number of front row glass seats are available at only $23.50 per game. Contact the Winterhawks at 503-236-HAWK or seats@winterhawks.com to secure your seat for all 36 home games.