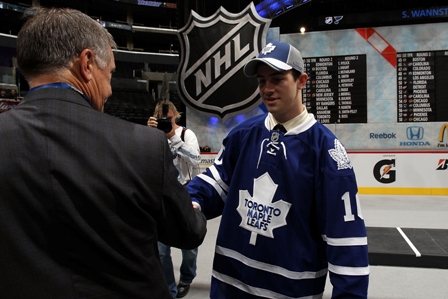 After a week of prospects camps and tournaments, nine Portland Winterhawks players have been invited to National Hockey League teams’ main training camps, which begin today.

Ryan Johansen (fourth overall pick, 2010) and Oliver Gabriel (free agent tryout) will go to camp with the Columbus Blue Jackets after playing for the team’s entry in the annual prospects tournament in Traverse City, Michigan. Johansen had a goal and two assists in three games, while Oliver Gabriel had one goal and one assist in four games in the tournament.

Winterhawks captain Brett Ponich (second round pick, 2009) also played in that tournament for the St. Louis Blues, and he has been invited to the Blues’ main camp.

Nino Niederreiter (fifth overall pick, 2010) will be going to the New York Islanders’ camp. Niederreiter picked up a goal in a game between Islanders prospects and Boston Bruins prospects on Wednesday.

Brad Ross (second round pick, 2010) will be attending the Toronto Maple Leafs’ main training camp after suiting up for their rookie squad in exhibition play.

Taylor Aronson (third round pick, 2010), recuperating from offseason shoulder surgery, is set for the Nashville Predators’ camp, while the Colorado Avalanche’s camp will feature two Winterhawks players, with Troy Rutkowski and Luke Walker both set for main camps after being fifth round picks in the 2010 draft. Riley Boychuk (seventh round, 2010) will join former Winterhawk Paul Gaustad in camp with the Buffalo Sabres.

“Going to these teams’ main camps and practicing alongside NHL veterans will be a tremendous experience for each of these players,” said Portland Winterhawks General Manager & Head Coach Mike Johnston.

Season tickets for the 2010-11 season are on sale now. Prices start at just $10.50 per game while a limited number of front row glass seats are available at only $23.50 per game. Contact the Winterhawks at 503-236-HAWK or seats@winterhawks.com to secure your seat for all 36 home games.