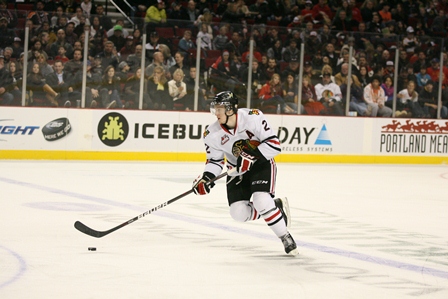 Two teams square off in separate 30-minute back-to-back games in two sessions each day, meaning each team plays eight games in the tournament. The recaps are below:

Team Heath (3) vs. Team Mick (0), Game 1:
Ty Rattie scored twice as he led Team Heath to a 3-0 win over Team Mick in the first game of the day.  Evan Weinger added the third goal for Team Heath, who got a shutout behind goaltender Adin Hill.

Team Holland (3) vs. Team Yaremchuk (5), Game 1:
The third game of the day was the wildest, with Team Yaremchuk opening up a 4-0 lead on goals by Paul Ramsey, Brendan Leipsic, Derrick Pouliot and Ethan Price, a lead they held until there were two minutes remaining. But Paul Bittner got Team Holland on the board, and Oliver Bjorkstrand and Greg Johnson scored in quick succession to make it 4-3. Team Holland nearly completed the comeback when they rang one off the post, but Team Yaremchuk got a late empty net goal from Keoni Texeira to seal the 5-3 win.

Team Holland (5) vs. Team Yaremchuk (3), Game 2:
Thursday’s nightcap was another back-and-forth game, as Team Holland jumped to a 3-0 lead behind two goals from Alex Schoenborn and another from Bjorkstrand. But Team Yaremchuk stormed back to tie the game with goals from Ethan Price, Conner Kortko and Jeremey Leipsic. Troy Rutkowski scored for Team Holland to regain the lead at 4-3, and Rutkowski capped the scoring with an empty net goal to give them the 5-3 win.