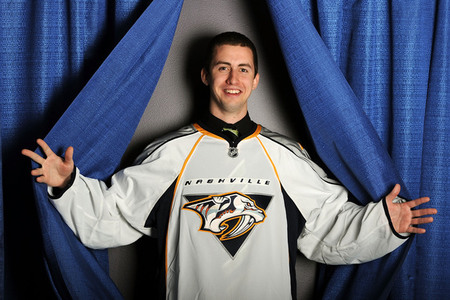 Winterhawks defenseman Taylor Aronson has signed a three-year entry level contract with the National Hockey League’s Nashville Predators, who drafted him in the third round, 78th overall, of the 2010 NHL Entry Draft.

Aronson has three goals and 15 assists for 18 points in 37 games this season, after registering five goals and 25 assists for 30 points last season, his first in the Western Hockey League.

“This is an exciting time for Taylor and his family, and we’re very happy for him,” said Portland Winterhawks General Manager & Head Coach Mike Johnston. “Taylor is a very skilled player with a bright future ahead of him, and we’re confident the Predators will be very happy to have him in their organization.”

Full season, 18, 10 and 5-game ticket plans for the 2010-11 season are on sale now. Group rates start at just 10 people and every ticket includes a free Winterhawks hat. Contact the Winterhawks at 503-236-HAWK or seats@winterhawks.com to secure the best seats.