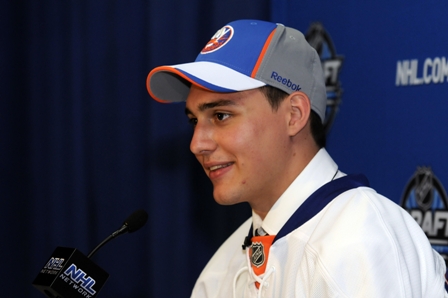 -Steve Brandon in the Portland Tribune writes today that Ty Rattie will be counted on a big season in 2010-11:

“The Portland Winterhawks don’t know yet how much firepower they will have to replace from the last Western Hockey League season. For sure, they’ll need one or more players to significantly increase their scoring if they’re going to match or build on their 2009-10 output and winning record.

The Hawks graduated leading scorer/center Chris Francis to the pro ranks, and NHL draft picks such as forwards Nino Niederreiter, Luke Walker and Ryan Johansen are competing this week to stick in the big leagues.

-Steve Ewen of The Province in Vancouver weighs in on the Winterhawks having so many players away at NHL camps:

“Here’s betting that if they had a reunion of the 1999-2000 Vancouver Canucks any time soon, a few WHL general managers would try to crash it to try to get a leg up on what’s going to happen in their league.

One of the goaltenders on that Vancouver team was Garth Snow. He’s now the general manager of the New York Islanders. One of the assistant coaches with the Canucks then was Mike Johnston, and he’s currently the bench boss of the Portland Winterhawks.

Snow’s Islanders nabbed Portland winger Nino Niederreiter with the fifth choice in this year’s entry draft and they got his signature on a three-year, entry-level contract on Tuesday. Portland’s the best team in the WHL on paper this season. If Niederreiter sticks in the NHL as an 18-year-old, they take a good hit.”

–Nino Niederreiter signed with the Islanders yesterday, and he spoke to nhl.com for a couple of articles:

‘It’s just fantastic to be a part of the Islanders and even now that I’ve signed here, it’s just unbelievable,’ Niederreiter said during the press conference.”

That article can be found here, with another article here:

“Nino Niederreiter  arrived at Nassau Veterans Memorial Coliseum on Tuesday morning preparing for the fourth day of his first NHL training camp. He left with his first professional contract.”

-Two Winterhawks got on the scoresheet in NHL preseason games last night, as Oliver Gabriel scored in Colmbus’s victory over Atlanta, while Luke Walker tallied a goal for the Colorado Avalanche in a victory over Brett Ponich’s St. Louis Blue.