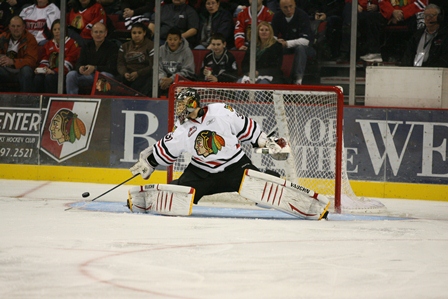 Portland Winterhawks goaltender Mac Carruth has signed a three-year entry level contract with the Chicago Blackhawks. He was drafted by Chicago in the seventh round, 191st overall in the 2010 NHL Entry Draft.

Carruth will be entering his 20-year-old season in 2012-13, meaning he could play for Chicago’s American Hockey League affiliate, the Rockford IceHogs, or come back to Portland for his final season of junior eligibility.

Carruth has played 137 regular season games in three seasons in Portland, compiling a record of 87-39-3-1, with four shutouts, a goals against average of 3.08 and 90.5% save percentage. His 42 wins in 2011-12 set a new single-season franchise record, and his 87 career wins are second in franchise history.

He’s also backstopped the Winterhawks to two straight Western Conference championships, and in three seasons has posted a record of 33-19 in the playoffs, with three shutouts, a goals against average of 3.10 and 91.4% save percentage. He holds franchise records in playoff wins (33), games (54), saves (1744) and minutes (3193), while his three shutouts are tied with Lanny Ramage for the lead in that category.

“Mac has been one of our most valuable players since he joined us in 2009,” said Portland Winterhawks General Manager & Head Coach Mike Johnston. “We’d love to have Mac back with us for one more season, but if the Blackhawks assign him to the AHL, then we wish him the best as he pursues a pro career.”

Season tickets for the 2012-13 season are on sale now. Visit winterhawks.com or call 503-236-HAWK to make sure you catch all the action.