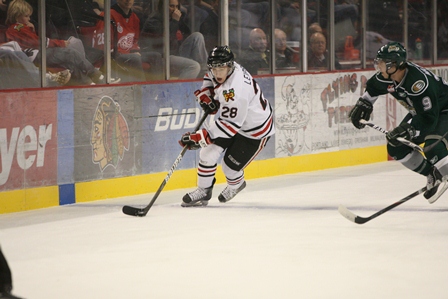 Portland Winterhawks players Brendan Leipsic and Taylor Leier were selected in the National Hockey League Entry Draft Saturday. Leipsic was drafted in the third round, 89th overall by the Nashville Predators and Leier went in the fourth round, 117th overall to the Philadelphia Flyers.

Their selections give the Winterhawks three players taken overall in the 2012 Entry Draft after Derrick Pouliot was taken eighth by the Pittsburgh Penguins in yesterday’s first round.

“Being drafted is an outstanding accomplishment, and we’re very excited for Brendan and Taylor,” said Winterhawks General Manager & Head Coach Mike Johnston.  “Of course, having watched so many teammates go through the draft process in recent seasons, they know this is just the beginning and that it will take a lot of hard work to make it to the next level.”

Leipsic played 65 games last season and registered career-highs with 28 goals and 30 assists for 58 points. He added 15 points in the playoffs, and last week was selected to represent Canada in the 2012 Canada-Russia Challenge.

Leier, in his first season with the Hawks, played all 72 games and led the team’s rookies with 13 goals and 24 assists for 37 points. He added seven points in the playoffs.

With three players taken in the 2012 NHL Entry Draft, the Winterhawks have now had 122 players drafted in franchise history, including 15 players in the last three years.

Season tickets and 20- and 12-game ticket packages for the 2012-13 season are on sale now. Visit winterhawks.com or call 503-236-HAWK to reserve the best seat locations.