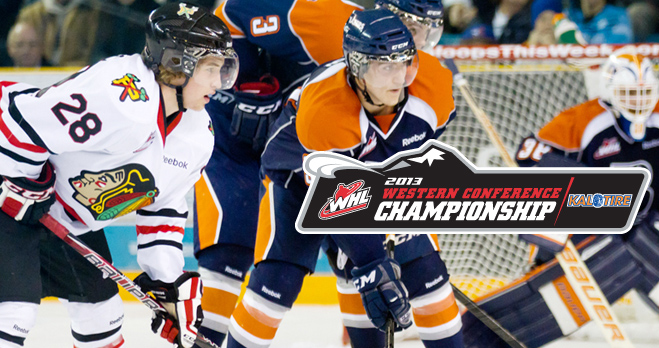 CALGARY, AB — The 2013 WHL Playoffs Conference Championship series’ open today as the quest for the Ed Chynoweth Cup and a spot in the 2013 MasterCard Memorial Cup tournament in Saskatoon, SK, continues.

The Portland Winterhawks have made it three straight years in the Kal Tire WHL Western Conference Championship series, moving through the Everett Silvertips in six games and sweeping aside the Spokane Chiefs in the first two rounds of the 2013 WHL playoffs.

The Kamloops Blazers are making their first trip to the Western Conference final since 1999 after knocking off the Victoria Royals in six games in the opening round then sweeping the B.C. Division Champion Kelowna Rockets in the second round.

Can Brendan Leipsic and the Portland Winterhawks make it three straight Western Conference Championships by knocking off the Blazers for a second year in a row?  Or, can Brendan Ranford’s Blazers ground the high-flying Hawks and make their return to the WHL Championship series for the first time in 14 years?

The Portland Winterhawks meet the Kamloops Blazers in the post-season for the second straight year.  Sven Baertschi and the Winterhawks edged Austin Madaisky and the Blazers four games to three in a thrilling seven-game series in the second round of the 2012 WHL playoffs.

The Winterhawks are in the Kal Tire WHL Western Conference Championship series for a third consecutive year, and are the two-time defending Western Conference Champions.  The Hawks may have endured some hardships in their opening-round win over Everett, but they appear to have found their stride in the second-round sweep of the Chiefs.  Offensively, the Winterhawks are now firing on all cylinders, having scored 18 goals in four games versus Spokane.  Led by Ty Rattie’s 11 goals, Portland’s top trio of Rattie, Brendan Leipsic and Nic Petan have combined for 21 goals and 49 points in the post-season.  They will be a challenge for Kamloops to handle, considering they also combined for seven goals and 18 points in four regular-season games versus the Blazers.  If Rattie, Petan and Leipsic don’t do the damage, the Hawks boast the depth to find the back of the net with regularity with 11 players having put up at least eight points through the team’s first 10 games.  Defensively, the Hawks gave up just three goals in four games to the Chiefs, and posted a pair of shutouts.  Derrick Pouliot has been an offensive force from the blue line while Seth Jones, Troy Rutkowski and Tyler Wotherspoon have each put up two goals and eight points in 10 games.  As good as they have been offensively, the Hawks’ defence corps has also helped team kill off 25 of 28 opposition power plays in the post-season.  Mac Carruth added four more wins and two shutouts to his resume with their sweep of the Chiefs, and now has more career playoff wins than any other goaltender in WHL history.  He posted a solid 2.01 GAA and a .922 save percentage in four games versus Kamloops this season.

The Blazers are making their first trip to the Kal Tire WHL Western Conference Championship series since 1999 when they made it all the way to the WHL Championship series, losing to Calgary.  The Blazers needed just four games to eliminate their B.C. Division rival Kelowna in the second round, taking advantage of a Rockets team that was missing several key players.  However, it was their strong, relentless play and offensive fortitude more so than Kelowna’s injuries that enabled the Blazers to advance in such short order.  Up front, the Blazers scored 18 goals in four games versus a stingy Rockets’ defence.  Veteran star Brendan Ranford enjoyed an outstanding series versus Kelowna, putting up four goals and eight points in four games, while JC Lipon continued his torrid playoff scoring pace as well.  Those two, along with Colin Smith and Kale Kessy, will need to be at their best to beat a Winterhawks team that held the Blazers to just nine goals in four regular-season meetings.  Defensively, the Blazers have been adequate, so far, through the post-season, managing to outscore their opponent on most nights.  They will need to improve on their 77.1% penalty killing efficiency to limit Portland’s highly dangerous power play.  Cole Cheveldave has managed to make the key saves when called upon during the post-season.  Cheveldave allowed 11 goals on 94 shots over three appearances versus the Winterhawks, winning just one of those three games.  He will need to be at his best to give the Blazers a better chance to win the series.