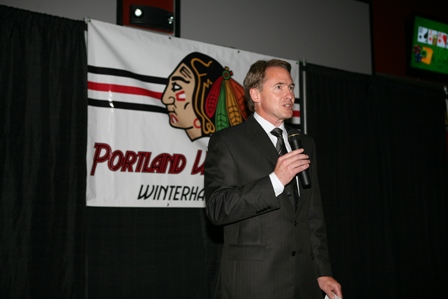 Bartschi and Johnston will find out if they are the WHL award winners at the league’s awards luncheon in Calgary, Alberta on Wednesday, May 4.

In addition, Ryan Johansen was named to the Western Conference First All-Star Team after posting 40 goals and 52 assists for 92 points in 63 games, ranking seventh overall in league scoring. It was the most points by a Winterhawks player since Josef Balej also had 92 in the 2001-02 season. Johansen was named team MVP by his teammates, and won a silver medal representing Canada at the 2011 World Junior Championship. He was drafted fourth overall by the Columbus Blue Jackets in last year’s NHL Draft.

Tickets to Game 1 and Game 2 are available now at ticketmaster.com, the Rose Quarter box office and the Winterhawks’ ticket office in the Memorial Coliseum. In addition, playoff packages and group tickets for the playoffs are available by calling 503-236-HAWK. Tickets to Game 5 can be purchased by calling the Winterhawks’ ticket office at 503-236-HAWK.