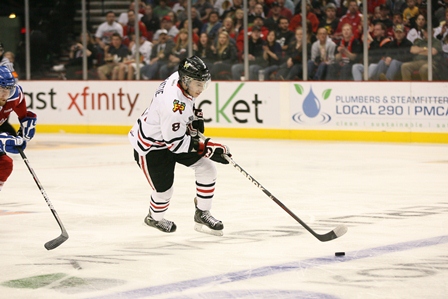 The Portland Winterhawks defeated the Edmonton Oil Kings 4-3 in Game 3 of the WHL Final Sunday to take a 2-1 series lead in front of a sold out crowd of 10,947 at the Rose Garden.

After a scoreless first period, Sven Bartschi opened the scoring 4:53 into the second when he took advantage of an Edmonton turnover in the offensive zone and beat Laurent Brossoit with a backhand to give the Hawks a 1-0 lead.

The Hawks made it 2-0 when Rattie scored his record-setting goal on a power play at the 12:06 mark, then just 29 seconds later Oliver Gabriel struck for another power goal to put the Hawks ahead 3-0. Rattie’s goal allowed him to pass Randy Heath to set a new franchise record for career playoff goals. Portland was dominant in the period, outshooting Edmonton 14-5 in the frame.

Edmonton got on the board 20 seconds into the third when Henrik Samuelsson scored to cut Portland’s lead to 3-1, but the Hawks got that one back at the 4:37 mark when Brendan Leipsic found himself alone in front of the net and went high over Brossoit to put Portland up  4-1.

The Oil Kings again cut Portland’s lead to two goals when Martin Gernat scored at the 7:16 mark to make it 4-2, then made it a one-goal game when Keegan Lowe scored midway through the period to make it 4-3.

But the Winterhawks slammed the door from there to finish with the win and the series lead.

The two teams are back on the ice Tuesday at 7 p.m. in the Rose Garden for Game 4.