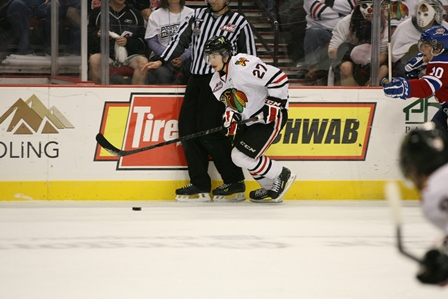 There will be a Game 5 in the WHL Final Friday at 7 p.m. in the Rose Garden. Get your tickets now!

The Portland Winterhawks evened the WHL Final at 1-1 with a 3-0 win over the Edmonton Oil Kings in Game 2 Saturday at the Rose Garden in front of a sold out crowd of 10,947.

The two teams now head to Edmonton with Game 3 Tuesday and Game 4 Wednesday, and the series will return to Portland for Game 5 Friday at the Rose Garden at 7 p.m.

Ty Rattie opened the scoring for Portland on a power play 9:09 into the first when he pounced on a loose puck at the side of the net and banged it in for the lone goal of the first period. It was Rattie’s 46th career playoff goal, one shy of the WHL record held by Mark Pederson (Medicine Hat, 1983-88).

It remained 1-0 until late in the second when the Hawks scored two goals just 1:25 apart, beginning at the 17:20 mark when Brendan Leipsic snapped a shot from the left faceoff circle past Edmonton netminder Laurent Brossoit’s glove to make it 2-0. Oliver Bjorkstrand followed up right after with a blast from the right faceoff circle that beat Brossoit to make it 3-0 going into the third.

From there Portland didn’t allow Edmonton to get anything going, stifling them defensively as they outshot the Oil Kings 14-2 in the period to finish with the 3-0 win.

Portland was 1-7 on the power play and a perfect 3-3 on the penalty kill.