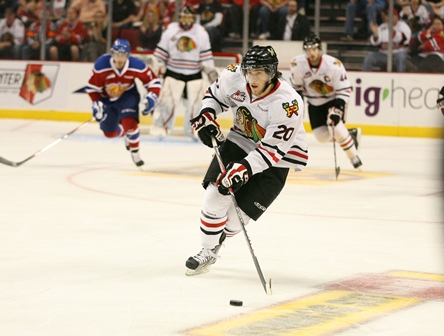 How’s this for a pretty good Saturday: win a gold medal in an international competition, and get drafted by the Philadelphia Flyers.

Such was the day for Winterhawks forward Taylor Leier on June 23. He was part of the team representing Canada that won the gold medal at the World U-18 Ball Hockey championship in the Czech Republic. While in the locker room celebrating the title, one of his teammates checked online and stopped the festivities to announce that Leier had been selected by the Flyers in the fourth round, 117th overall.

“That was something you dream of. They piled on me, chanted on my name, it was surreal,” said Leier.

When he got back to the hotel he connected with his family on Skype to share the moment with them. “As soon as my mom answered she just screamed.”

It’s been a whirlwind summer for the 18-year-old. He spent two weeks in the Czech Republic for the ball hockey tournament, went home to Saskatoon for about a week, then headed off to the Flyers’ Development Camp.

At Philly’s camp, there was the usual on-ice and weight room work, but Leier and the rest of the prospects headed to a beach in nearby New Jersey for the team’s annual Trial on the Isle, where all of the Flyers’ prospects are put through a variety of military-style exercises on the beach.

“They put us through a lot of teamwork things like running a half mile, picking up a stretcher in a group of six, with five guys carrying it while one lies on it, then running him back, and kayak racing with one guy blindfolded and another directing,” said Leier.

The week in Philadelphia was the latest opportunity for him to rack up frequent flyer miles after his two weeks in the Czech Republic for the ball hockey tournament. The opportunity to represent his country in international play began with a bit of good timing.

It was Leier’s first trip to Europe, and coming in the weeks leading up to the draft the timing couldn’t have been better.

“It took my mind off the week and a half leading into the draft. I was away from everything, away from the media, the pressure, it was really nice,” he said.

As nice as it was to get away, Leier and his teammates weren’t just using it as a vacation. They had to battle Slovakia, Switzerland and the host Czech Republic in the tournament. They went 2-0-1 in the round robin to advance to the championship game, where they took on Slovakia.

It was a hard-fought contest that Leier and his Canadian teammates won by the narrowest of margins: 1-0. And while it wasn’t an Olympic gold medal or a Stanley Cup, it was still a thrill for Leier to wear a gold medal around his neck.

“It was a really good feeling, not many people get to experience something like that,” he said.

Now with his ball hockey career on hold and the stress of the draft behind him, Leier is looking ahead to the 2012-13 season in Portland as he hopes to help the Winterhawks get back to the WHL championship.

“I was really happy with my rookie season. I had a great time, I was on a winning team and part of great organization. But I’m really looking forward to breaking that ice in the finals and winning it.”