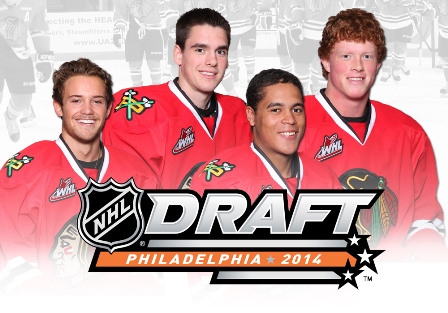 Three of the players went in the third round, beginning with Turgeon going 63rd overall to the Detroit Red Wings, Schoenborn being selected 72nd overall by the San Jose Sharks and Iverson being drafted 85th overall by the New York Rangers. De Leo was then selected in the fourth round, 99th overall by the Winnipeg Jets.

“Watching our players get drafted is one of the most gratifying aspects of the job. When players come to Portland they all have goals of playing in the NHL and today Dominic, Alex, Keegan and Chase are one step closer to reaching that goal,” said Portland Winterhawks Assistant General Manager Matt Bardsley. “This is an exciting moment for any young player and we are excited for them and their families.”

All four players set career-highs in scoring in 2013-14, while De Leo, Iverson and Turgeon were all invited to the U.S. National Junior Evaluation Camp, Aug. 2-9, in Lake Placid, New York.

De Leo played in all 72 games, posting career-highs with 39 goals and 42 assists for 81 points. He also led the team with a +49 rating, also good for third in the league. De Leo went on to add 19 points in 21 playoff games.

Premier Membership season tickets and 20, 12 and 6-game plans for 2014-15 are on sale now. Contact the Winterhawks today at 503-236-HAWK or seats@winterhawks.com to guarantee the best seat locations.