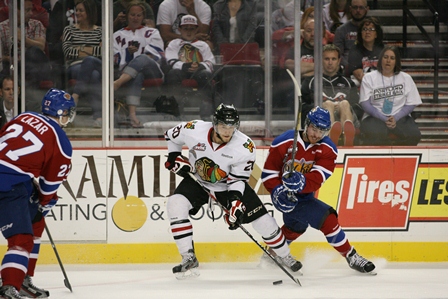 Portland Winterhawks players Taylor Leier, Brendan Leipsic, Nic Petan and Derrick Pouliot have been selected to represent the Western Hockey League at the two SUBWAY® Super Series games slated for WHL buildings: November 27 in Red Deer and November 28 in Lethbridge. The Hawks’ four players are the most of any team in the WHL.

The SUBWAY® Super Series features regional teams of CHL All-Stars competing against the Russian National Junior Team in a six-game event serving as an integral part of the identification process for Team Canada for the past 10 years prior to the IIHF World Junior Hockey Championship.

“The SUBWAY® Super Series will be a great opportunity for our players to showcase their abilities against the Russian Select Team as Russia always has a strong showing at the World Junior Tournament and is always one of the favorites,” said Portland Winterhawks General Manager & Head Coach Mike Johnston. “All four players are off to great starts this season and are strong candidates for Canada’s World Junior team.”

Leier, the Winterhawks’ captain, has 22 points in 18 games this season. He was a fourth round pick by the Philadelphia Flyers in the 2012 NHL Draft.

Leipsic has 18 points in 13 games this season, after posting 120 points last season, tying him with Petan for the lead across the CHL. He was a third round pick by the Nashville Predators in the 2012 NHL Draft.

Petan has 37 points in 18 games this season, ranking first on the team and second in the league. He registered 120 points last season, tying him with Leipsic for the lead across the CHL. He was a second round pick by the Winnipeg Jets in this year’s NHL Draft.

Pouliot leads all Winterhawks defensemen with 15 points in 14 games this season. He was the eighth overall pick of the 2012 NHL Draft by the Pittsburgh Penguins.