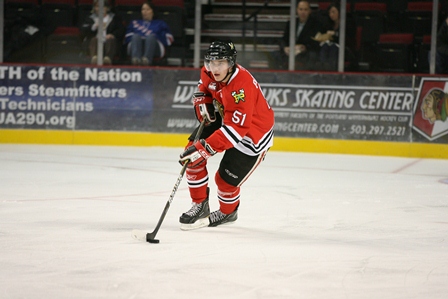 Pouliot played all 72 regular season games and finished with career-highs across the board with 11 goals and 48 assists for 59 points, along with a +15 ranking. His 59 points was second among all Winterhawks defensemen, and ranked fourth overall among WHL blueliners.

Hanson, a defenseman, also played all 72 games this season and finished with career-highs with 13 assists and a +6 rating.

Leipsic, a forward, played 65 games and registered career-highs with 28 goals and 30 assists for 58 points.

Leier, in his first season with the Hawks, played all 72 games and led the team’s rookies with 13 goals and 24 assists for 37 points.

The 2012 NHL Draft will be held on June 22 and 23 in Pittsburgh. The Winterhawks have had four players selected in the first round over the last two years, and 12 players drafted overall in that time.