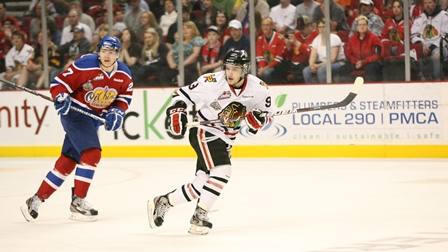 When Chase De Leo left Southern California behind last year to join the Winterhawks, he bid farewell to his family, his friends, and his donkey.

“It’s good to see them again,” he said from his home earlier this week, referring to the donkey and other assorted animals his family owns.

Like many SoCal kids, De Leo spends a lot of his time during the summer at the beach with his friends. Unlike many SoCal kids, once he gets home, he has a menagerie of animals waiting for him. Ask him to list them, and De Leo has to pause and take a moment to make sure he doesn’t forget any.

In a few weeks he’ll again be saying goodbye to Hansel and the gang to return to Portland for his second season with the Winterhawks, and will be looking to take advantage of an opportunity to gain a bigger role this season. With many familiar faces expected to move on from the two-time conference champions, there will be opportunities for other players to step in and help carry the offensive load.

“Talking to the coaches, I know there’s going to be a battle for spots this season,” said De Leo. “But no one can come in and expect anything, you have to earn it, and I hope I can work my way to getting a big spot on the team.”

As the youngest player on the team last season, De Leo spent most of the season on the fourth line, learning the nuances of making the jump to the WHL.

“(The biggest change was) playing against older guys who are bigger and stronger and know lots of little tricks,” he said.

De Leo held his own as a rookie, putting up 14 goals and 16 assists in 69 games. He also gained the experience of being part of a team that won the conference championship and advanced to Game 7 of the league final.

“I went in wanting to get 30 points and that’s what I did. I couldn’t have asked to be on a better team with a better group of guys, they helped me so much,” he said. “The coaching was great and we made it far, but we fell a little short. The older guys taught me a lot, so hopefully I’ll be able to teach the younger guys the same things.”

It’s strange to think that last year’s rookie will be able to impart veteran advice just a year later, but the Hawks will have many new faces in the lineup this season, and De Leo will know exactly what they’re going through.

It adds up to a big year for him, as he looks to take on an increased role for himself, help the team get back to the final and assist the rookies in their transition.

But there’s another goal looming for De Leo: the 2014 NHL Draft. As a rookie last season he came into a locker room littered with NHL picks, with 12 players having been taken in the previous two drafts.  Then in June he watched three more teammates – Derrick Pouliot, Brendan Leipsic and Taylor Leier – get the call. This season, one of the top prospects for the 2013 Draft, Seth Jones, joins the team. Watching so many teammates get picked has made it feel real that his turn could be coming in two years.

“I was so happy for Derrick, Brendan and Taylor, they’re all my best friends. I was watching the draft and when they each got taken I started cheering, I was so pumped for them,” he said. “It’s weird, growing up you look at it and you have six or seven years until your draft year, and now it’s right around the corner.”

But he’s not getting too far ahead of himself. There’s much to be done until then. As he says, he wants to “win one more game than we did last year”.

If the Hawks make it that far again, it will mean that much more time away from the Hansel and the gang, but it’s a sacrifice De Leo would be happy to make.