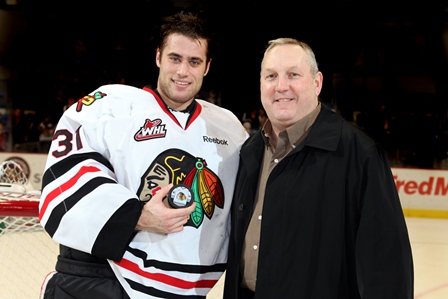 The victory was the 106th career win in net for Carruth, as he passed Darrell May, Sr. for the franchise record. May, who was on hand Wednesday and congratulated Carruth on the ice after the game, had held the record since the conclusion of his WHL career in 1982.

In addition, Carruth turned away all 23 shots he faced for his eighth career shutout to tie the franchise record in that category, a mark he shares with Kurtis Mucha and Lanny Ramage.

The win was the 12th straight for the Hawks, who lead the WHL with 71 points on the season.

After a scoreless first period, the Hawks dominated the second as they outshot Prince George 24-5 in the period. Portland finally broke through on a five-on-three power play with just over a minute to go in the frame as Troy Rutkowski fired one past Cougars netminder Mac Engel to make it 1-0 going into the third.

The Hawks extended the lead 3:50 into the third when Brendan Leipsic scored to make it 2-0. The goal extended Leipsic’s point streak to 10 games, a stretch in which he has five goals and 13 assists for 18 points.

Taylor Leier added a late empty net goal to round out the scoring and give the Hawks the 3-0 win to secure the record for Carruth.

The Hawks are back in action Friday when they host the Spokane Chiefs at 7 p.m. in the Rose Garden.