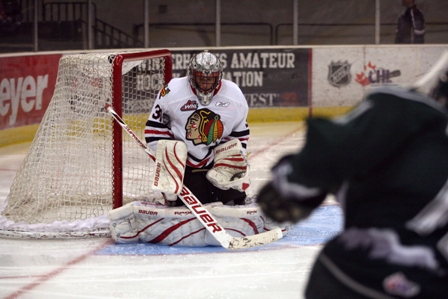 Mac Carruth picked up his 36th win of the season in net for Portland, breaking the franchise’s all-time record for wins in a season by a netminder. The record had been held by Brent Belecki, who had 35 wins in the 1997-98 Memorial Cup season.

Along with Portland’s win, the Tri-City Americans defeated the Seattle Thunderbirds 5-2 Friday, so the two teams remain tied atop the U.S. Division with 81 points apiece.

Portland opened the scoring 2:15 into the game when Taylor Leier beat Silvertips netminder Kent Simpson to give the Hawks a 1-0 lead they took into the second period.

They made it 2-0 at the 4:45 mark of the second when Oliver Gabriel scored his 12th of the season with an assist from Sven Bartschi. The goal extended Gabriel’s scoring streak to nine games, while Bartschi’s assist extended his streak to eight games.

The Silvertips got on the board at the 16:19 mark of the second on a goal by Jordyn Boyd to make the score 2-1 going into the third.

The score remained 2-1 through much of the second, until Bartschi scored a breakaway goal at the 16:47 mark to give the Hawks a 3-1 lead. Ty Rattie then added an empty net goal with 32 seconds to play to give the Hawks the 4-1 win.

The Hawks are back in action tomorrow at 3 p.m. when they host the Seattle Thunderbirds at Veterans Memorial Coliseum. The Coliseum’s curtains will be open for the game, allowing sunlight into the arena.