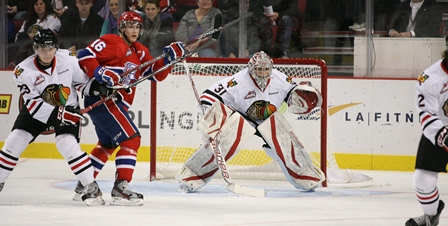 The Portland Winterhawks took a 2-0 series lead over the Spokane Chiefs with a 3-0 win in Game 2 of their second round series Saturday at the Rose Garden in front of 10,326 fans.

With the victory, Hawks netminder Mac Carruth set a new WHL record with his 39th career playoff win. Carruth passed Cam Ward, who previously held the record with 38, set with the Red Deer Rebels from 2001-04. With 27 saves on 27 shots, the blanking also gave Carruth his fourth career playoff shutout, passing Lanny Ramage for sole possession of the franchise record.

The Hawks opened the scoring 13:17 into the first when a tic-tac-toe passing play ended with Chase De Leo firing the puck into a wide open net to make it 1-0 for the lone goal of the period.

Nic Petan scored his fourth of the playoffs 1:05 into the second to give the Hawks a 2-0 lead, which would remain the score going into the third.

It remained 2-0 until midway through the third, when Seth Jones picked off a Spokane pass through the neutral zone and led a rush the other way, which ended with Ty Rattie feeding Brendan Leipsic for a tap-in and a 3-0 lead at the 9:02 mark, which rounded out the scoring.

Leipsic and Rattie finished with two points apiece in the win.

The series now shifts to Spokane for Game 3 on Tuesday and Game 4 on Wednesday.