Bjorkstrand Named Player of the Week 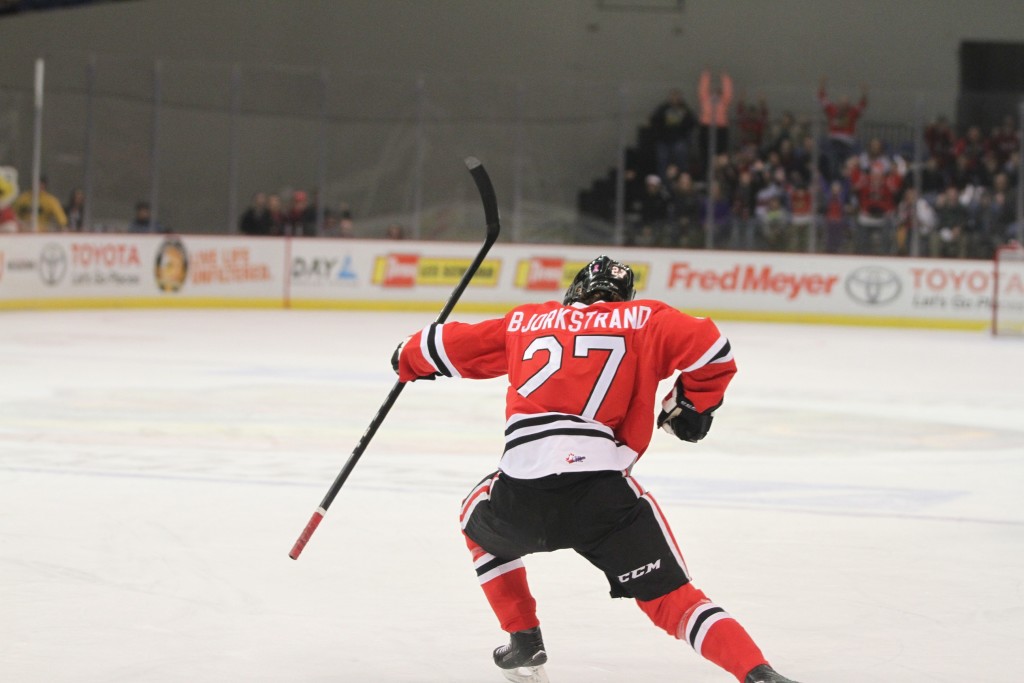 Bjorkstrand tallied eight points (4g-4a), while posting a plus-five rating in three games over the past week, leading the Winterhawks to a 2-1 record in that span.

On Wednesday, January 7th, Bjorkstrand scored the opening goal in his first game back after representing Denmark at the 2015 World Junior Hockey Championship as the Winterhawks fell to the host Spokane Chiefs 4-1. On Friday, January 9th, Bjorkstrand had a four-point night (1g-3a) and finished the game with a plus-four rating while earning first star honours in a 5-3 triumph over the Chiefs in Spokane. Bjorkstrand finished the week by potting the short-handed game-winner as part of a three-point effort (2g-1a) and was named the game’s first star in a 5-3 victory over the visiting Vancouver Giants on Saturday.

The 6’0”, 168-lb forward has notched 48 points (25g-23a) along with a plus-20 rating in 31 games this season. He currently is tied for sixth place in the WHL for goals this season. A 19-year-old Herning, Denmark product, Bjorkstrand is in his third season in the WHL with the Winterhawks where he has amassed 220 points (106g-114a) in 165 career regular season contests. He was selected by the Columbus Blue Jackets in the third round, 89th overall, in the 2013 NHL Draft.

The WHL has also nominated Tristan Jarry of the Edmonton Oil Kings for the Vaughn CHL Goaltender of the Week award. Jarry, a 19-year-old Delta, BC native, posted a 1.00 goals-against average and a .971 save percentage in two starts during the past week. On Friday, January 9th, Jarry turned aside 36 of 37 shots while also claiming first star honours in a 4-1 win over the host Regina Pats. On Sunday, January 11th, Jarry made 31 saves while being named the game’s second star as the Oil Kings prevailed 4-1 over the Broncos in Swift Current. His 2.56 goals-against average and .914 save percentage this season are ranked sixth and seventh respectively in the league. Now in his fourth season in the WHL with the Oil Kings, Jarry has registered an 85-37-5-3 record with 16 shutouts in 137 career regular season appearances. Jarry was chosen by the Pittsburgh Penguins in the second round, 44th overall, in the 2013 NHL Draft.