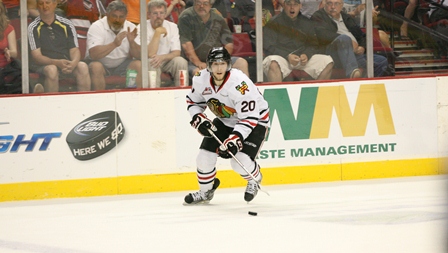 The line of Oliver Bjorkstrand, Chase De Leo and Taylor Leier combined for 16 points as the Portland Winterhawks (48-9-1-2) defeated the Spokane Chiefs (34-24-2-0) 8-3 Monday at Veterans Memorial Coliseum in front of 6,055 fans.

All three players finished with career-highs- Leier with six points (two goals, four assists), and Bjorkstrand (four goals, one assist) and De Leo (five assists) with five points apiece. The hat trick was Bjorkstrand’s second, after doing it at Tri-Cities on January 26, and it was the fourth four-goal game by a Hawk this season.

Leier had the first six-point game for the Hawks since Chad Wolkowski did it on December 1, 2002.

Portland got on the board with two goals from Leier in the game’s first five minutes, first off a great feed from De Leo at the 2:57 mark, then again at the 5:00 mark when he fired a shot past Spokane netminder Eric Williams after stripping the puck from a Chiefs player.

Portland extended the lead at the 14:28 mark when defenseman Shaun MacPherson fired a blast from the point over Williams’s shoulder to make it 3-0 going into the second period.

The Hawks extended the lead 2:02 into the second on a power play when Bjorkstrand fired one past Williams from the slot, which prompted a goaltending change for the Chiefs, as they brought Garret Hughson in to replace Williams. Bjorkstrand then registered his second power play goal of the period at the 7:04 mark to make it a 5-0 lead.

Bjorkstrand struck again for his fourth of the game at the 7:57 mark to put Portland ahead 7-2. Spokane’s Mike Aviani scored at the 12:05 mark to make it 7-3, but the Hawks got that one back with 3:25 to go when Paul Bittner scored on a power play to give the Hawks an 8-3 advantage that would stand as the final.

Mac Carruth picked up the win with 28 saves on 31 shots. Williams allowed four goals on 14 shots, and Hughson finished with four goals allowed on 19 shots.

The Hawks now head out on a three-game road trip, beginning Wednesday in Kamloops at 7 p.m.