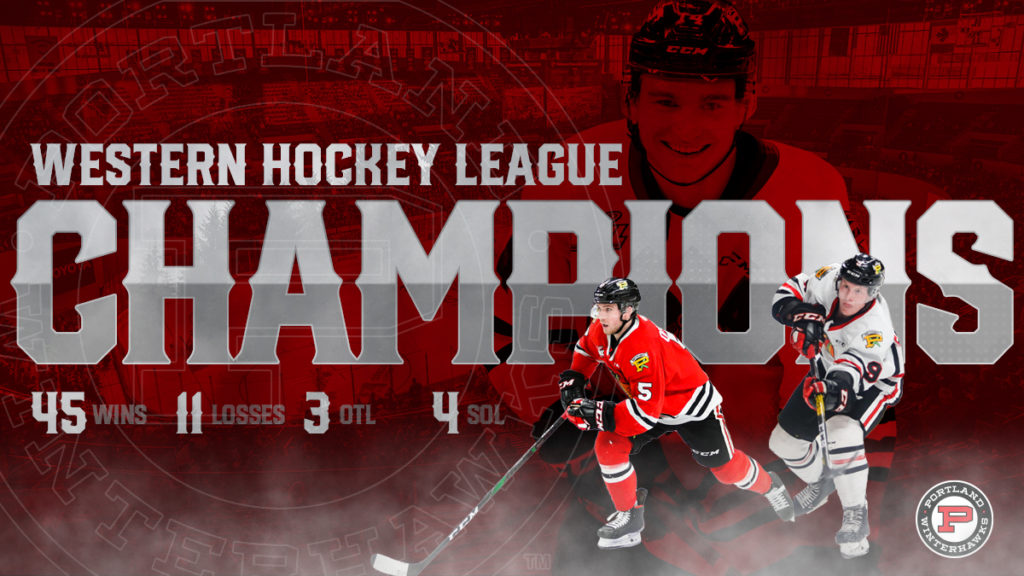 The Portland Winterhawks have claimed the Western Hockey League Regular Season Championship. Upon conclusion of the 2019-20 WHL Regular Season Wednesday, the Winterhawks were recipients of the Scotty Munro Memorial Trophy for the fourth time since relocating to Portland and the sixth time in franchise history.

Portland secured the top position in the U.S. Division and the best record in the league with a record of 45-11-3-4, giving them 97 points through 63 games. Since the WHL moved to a four-division format for the start of the 2001-02 WHL Regular Season, the Winterhawks have won five U.S. Division titles, claiming the honors in 2002, 2011, 2013, and 2014 before this season. All in all, this is the Hawks 14th Division title since moving to Portland prior to the 1976-77 season.

The Hawks thrived on home ice this season, playing in front of 169,518 fans and boasting the best home record of any WHL member Club with a 26-2-2-2 record through 32 games. It was the first time since 2011-12 the Winterhawks sported a .875 winning percentage in Oregon.

Under the tutelage of Head Coach and General Manager Mike Johnston, the Hawks have nine straight seasons with 40 or more victories and this year was the 17th time they’ve reached or surpassed the 45-win mark in a season. Highlighted by a 21-game streak (19-0-1-1) where they didn’t lose in regulation, the Winterhawks led the way among WHL clubs in the standings for the majority of the season. They also finished the season ranked fourth on the CHL’s Top Ten Rankings.

Portland finished second in the WHL with 270 goals, while ranking third with only 164 goals against. 2020 NHL Draft prospect Seth Jarvis led the Winterhawks in scoring with 98 points (42G-56A) this season, finishing second overall in WHL regular season scoring.

Defensively, team captain and Florida Panthers prospect Johnny Ludvig enjoyed an explosive season setting career highs with 17 goals and 45 assists for 62 points in 60 games. Joel Hofer impressed all season long with a 34-8-3-2 record, 2.49 goals-against average, 0.915 save percentage, and four shutouts. In December, Hofer helped lead Canada to a gold medal at the 2020 IIHF World Junior Championship in the Czech Republic and he emerged as the top goaltender at the tournament.

What makes the season more impressive is that in an era of hockey where top teams often acquire assets at the trade deadline, the Winterhawks only made one roster move in 2020, remaining confident in their young 23-man roster. The scouts have paid attention and Portland leads the WHL with five players ranked by NHL Central Scouting entering this summer’s NHL Entry Draft.

With the Scotty Munro Memorial Trophy in hand for the first time since 2013, the Winterhawks are now looking to add more hardware when they begin their pursuit of claiming the Ed Chynoweth Cup as WHL Champions.