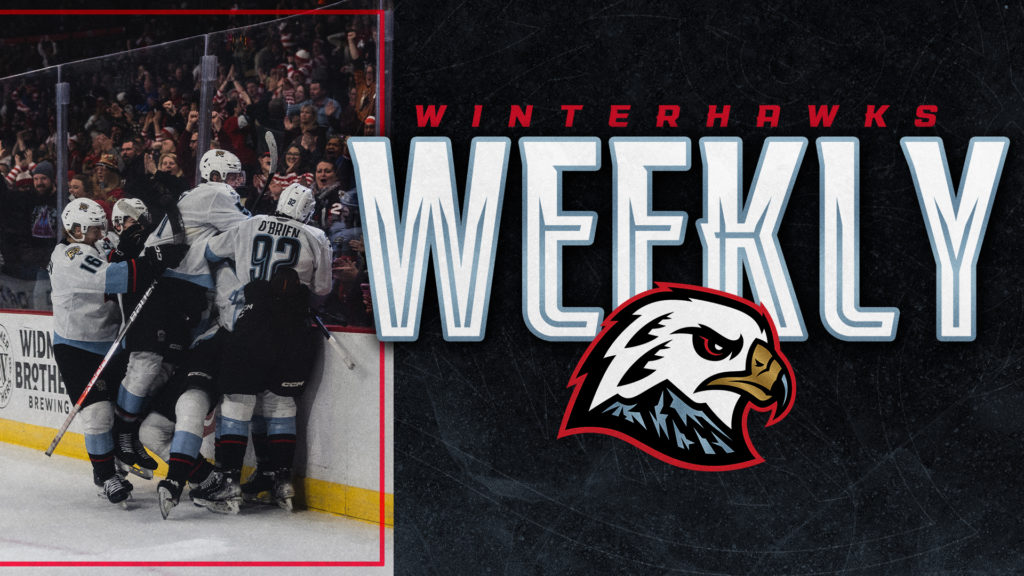 After beginning the new year on a two-week road trip, the Winterhawks returned to the VMC and won three consecutive contests over the weekend and on Monday, knocking off Victoria on Where’s Waldo Night, Lethbridge on Sippin’ Saturday and Spokane on Kids Day! Chaz Lucius also made his debut, and has kicked off his Winterhawks career with multi-point performances in every game played so far.

This week, we look ahead to Pride Night on Friday, a road matchup in the I-5 Rivalry against Seattle on Saturday, then a weekend wrap-up against Spokane on Sunday!

Ryan McCleary hit double-digit goals for the first time in his career with two tallies on Monday, including this bottle-popping beauty in the first period. The 2021 seventh-round draft choice of the Pittsburgh Penguins has excelled offensively this season and showed off how lethal his shot can be against the Chiefs. Take a look! ⤵️

Gabe Klassen, Robbie Fromm-Delorme, and James Stefan each scored twice, and Kyle Chyzowski tallied the overtime winner as the Winterhawks rattled off three unanswered goals in a 7-6 OT victory over Victoria on Friday.

Chaz Lucius scored his first WHL goal, Robbie Fromm-Delorme and Gabe Klassen each scored for the third straight game and the Winterhawks knocked off the Lethbridge Hurricanes 5-2 on Saturday night.

Gabe Klassen and Ryan McCleary each tallied twice as the Winterhawks rattled off five unanswered goals in a 6-1 romp over the Spokane Chiefs on Monday.

The busy start to 2023 continues with a three-in-three!

First up, we’re celebrating Pride at the VMC on Friday against the Swift Current Broncos! The second night in our “Hockey is for Everyone” series, Pride Night is an opportunity for Winterhawks players, staff and fans to promote an inclusive environment for LGBTQ+ people in our sport on and off the ice. We’ll sport specialty jerseys and fans can purchase Winterhawks Pride merchandise in the team store, as well as pre-order a special design from Swedish artist Mio Linzie. For more on Pride Night, click here.

Then, on Saturday, we’re trekking up to Kent for another battle with the Thunderbirds. The Hawks sit just one point shy of Seattle in the standings, so grab your popcorn for what should be a fantastic game. Puck drops at 6 for that tilt, and you can catch the action LIVE on Portland’s CW!

Wrapping up the weekend, we’re back on home ice against the Spokane Chiefs once again for a 5:00 P.M. faceoff on Sunday. Like Saturday, this game will also be broadcast on Portland’s CW. It’s a full weekend of Winterhawks hockey, and we can’t wait!