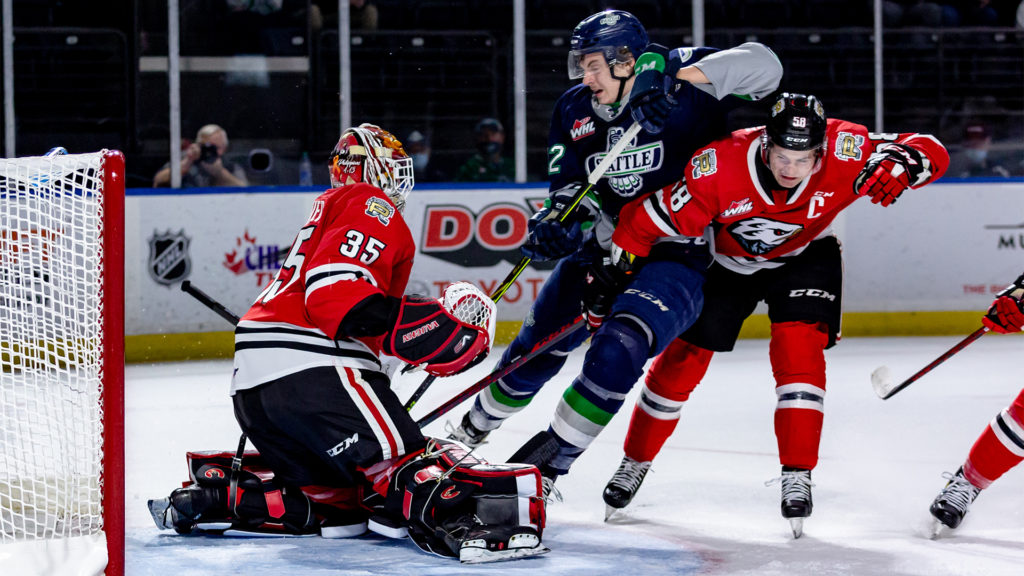 Despite seeing their lead erased in the third period, James Stefan and the Winterhawks picked up their sixth consecutive victory with a 4-3 OT decision over Seattle.

Taylor Gauthier stopped 47 shots, James Stefan and Tyson Kozak scored a pair of goals apiece and the Portland Winterhawks notched their 10th win in their last 11 games with a 4-3 overtime victory on the road over the Seattle Thunderbirds.

Portland flew out of the gates to take an early lead as James Stefan hammered home a one-timer just 1:37 into the contest. Gabe Klassen fed Stefan at the top of the circles for his 16th tally of the year and a 1-0 Winterhawks advantage. Seattle got to work on the power play, though, and responded just over five minutes later with Conner Roulette’s 11th goal of the season. Winding down the frame, Tyson Kozak collected a Jaydon Dureau pass at the Seattle blue line and walked in alone before wiring a shot top shelf to restore the Hawks’ lead at 13:24.

After Cross Hanas was dealt a five-minute boarding penalty and subsequent game misconduct to close out the first, Portland killed off a number of penalties before Kozak tallied his second of the game – again set up by Dureau – with four minutes to play in period two. Winterhawks goaltender Taylor Gauthier then withstood a barrage of Seattle shots to close out the period and maintain the two-goal lead.

The Thunderbirds kept up the pressure, though, and broke through with two goals in 20 seconds early in the third period to level the score 3-3. Jared Davidson’s 13th of the year came on the power play at 5:12 of the final frame, then Gabe Ludwig pounced on a rebound and broke the game wide open for the final 14 minutes. But after scoreless hockey for the remainder of regulation time, Portland’s James Stefan stepped up with his second goal of the game just six seconds into overtime, a wrist shot off the rush that quickly quieted the home crowd and sealed Portland’s sixth straight victory.

Gauthier’s 47 saves helped him to his second win with Portland, and he is now 2-0-0-0 with his new club.

The Winterhawks take on Tri-City at home on Saturday night. The puck drops at 6:00 p.m.

“It felt great tonight. Obviously ‘Goats’ stood on his head tonight from start to finish and really kept us in that game. It’s nice to come out with two points when you don’t play your best game.”