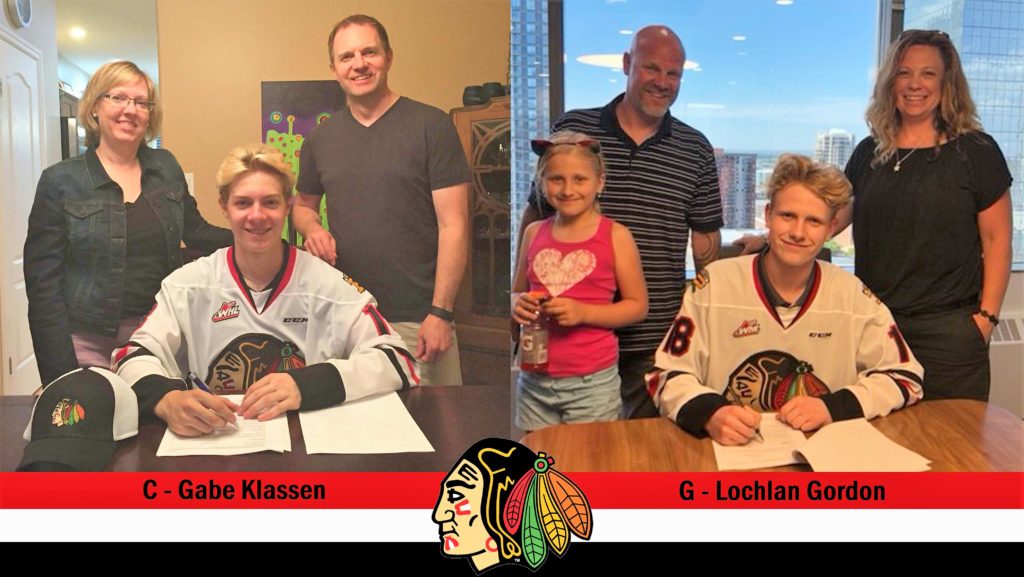 Portland, OR – The Portland Winterhawks are pleased to announce the signing of 2018 WHL Bantam Draft picks Gabe Klassen and Lochlan Gordon.

Klassen was selected in the first round, 19th overall in this year’s WHL Bantam Draft by the Winterhawks. The Prince Albert, Saskatchewan-born forward recorded 52 goals and 89 points in 31 games played with the Prince Albert BAA last season. Klassen was first on his team in scoring, and led the entire Saskatchewan Bantam AA Hockey League in both goals and points.

Goaltender Lochlan Gordon, who is from Edmonton, Alberta, was selected in the third round, 57th overall by the Winterhawks in the 2018 WHL Bantam Draft. He posted a 12-5-0-0 record and a 2.68 goals-against-average with the Northern Alberta Xtreme Bantam Prep last season. The 6’0” netminder also notched four shutouts in 18 games.

“As an organization, we are very excited to sign two elite prospects in Gabe and Lochlan,” said Winterhawks Vice President, General Manager & Head Coach Mike Johnston. “Our scouts identified Gabe as one of the top two-way centers in the province of Saskatchewan and the entire bantam draft. He’s an extremely smart player, who can contribute offensively, and will be an excellent complement to our 2002-born players we selected in the 2017 draft.”

“In regards to goaltenders, our scouts had Lochlan at the top of our draft list,” said Johnston. “He has a presence in net and plenty of tools to work with, and we believe he has the chance to be an elite goaltender in this league.”

Winterhawks season tickets and packages are on sale now, visit winterhawks.com/tickets for full details on pricing and availability.