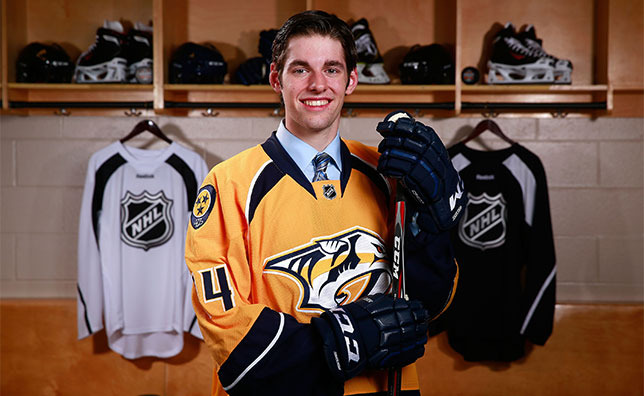 The Portland Winterhawks have signed 19-year-old defenseman Jack Dougherty, a second round pick of the Nashville Predators in the 2014 National Hockey League Draft. The Predators signed Dougherty to a three-year entry level contract this past Friday.

Dougherty, 6’2”, 190 pounds, will join the Winterhawks after playing last season with the University of Wisconsin. In 33 games as a freshman with the Badgers he had two goals and seven assists for nine points.

Before joining the Hawks for training camp next month, Dougherty will attend the U.S. National Junior Evaluation Camp from August 1-8, in Lake Placid, New York. He will be competing for a spot on the U.S. team that will take part in the 2016 International Ice Hockey Federation World Junior Championship, Dec. 26, 2015 – Jan. 5, 2016, in Helsinki, Finland. Current Hawks Paul Bittner, Dominic Turgeon and incoming defenseman Caleb Jones will also attend the camp.

“As a second round NHL Draft pick and with a year of NCAA experience, Jack will be an exciting addition to the team for the upcoming season,” said Portland Winterhawks General Manager & Head Coach Jamie Kompon. “Not only does Jack make his presence known defensively, he also provides the offensive abilities we look for in a Portland Winterhawks defenseman. We believe he will be an impact player for us in 2015-16.”

Prior to attending the University of Wisconsin, Dougherty played in the United States Hockey League for the U.S. National Team Development Program in 2013-14, where he posted 12 points in 23 games. He helped the United States win its fifth gold medal in a six-year span at the Under-18 World Championship in 2014, and led Team USA to a silver medal at the 2013 Ivan Hlinka Tournament.