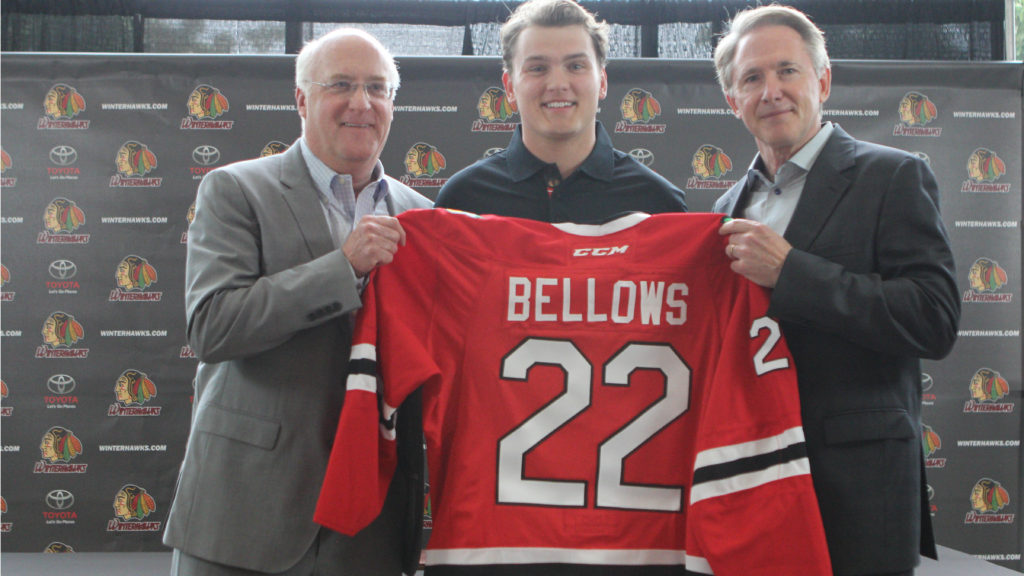 The Winterhawks initially selected Bellows in the seventh round of the 2013 WHL Bantam Draft. Bellows, from Edina, Minnesota, was selected 19th overall in the 2016 NHL Draft by the New York Islanders after winning titles at nearly every level.

First, he led Edina High School to a state title in his home state of Minnesota, picking up 27 points in 25 regular season games, and seven points in five playoff contests. He then won the 2015 Clark Cup in the USHL as a member of the Sioux Falls Stampede, where he scored 33 goals as a 16-year-old rookie, and added 9 goals in 12 playoff games. After winning the title in Sioux Falls, Bellows joined the United States Development team, where he fired home 66 goals in 85 games in his draft season, drawing attention from the New York Islanders.

Following his first-round selection, Bellows played last season in the NCAA with Boston University. During the season, Bellows was selected as a member of the United States’ World Junior team. He recorded two goals in the gold medal game against Canada, helping propel the United States to their first Gold Medal since 2013.

“We’re very fortunate that Kieffer has chosen to come to the Winterhawks this season,” said Winterhawks Vice President, General Manager and Head Coach Mike Johnston in a press conference Tuesday. “He has an impressive resume as a player, but also is learning how to win. Kieffer has a good scoring touch, and comes from great bloodlines with the NHL experience of his father, Brian Bellows, who won both a Stanley Cup and a Memorial Cup.”

“I’m very honored and privileged to be a part of this organization,” said Bellows Tuesday. “I can’t thank my mom and dad enough for helping me get to this point in my life. I’m very excited to help this team as much as I can.”

Bellows comes to the Canadian Hockey League, following in the footsteps of his father, Brian. Brian was a member of the 1982 Memorial Cup Champion Kitchener Rangers, where he put up a massive 97 points in just 47 regular season games. He was then selected 2nd overall in the 1982 NHL Entry Draft by the Minnesota North Stars, and would go on to a lengthy and successful NHL Career, notching 1,022 points in 1,188 career NHL Games. Bellows won the Stanley Cup in 1993 with the Montreal Canadiens, was selected to participate in three all-star games, and was named a second-team NHL all-star following the 1989-90 season.