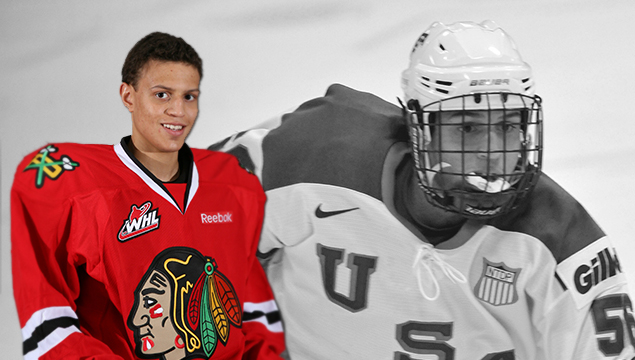 Jones played this season for the United States National Development U18 Team, where he had six goals and 18 assists for 24 points in 65 games.

He also just returned from helping lead USA Hockey’s National Under-18 Team to a gold medal at the U18 World Championship in Switzerland. Jones had five assists in seven games in the tournament, tying him for the team lead in scoring among defensemen.

“Caleb is an excellent two-way defenseman who will play a big role on our blueline next season. The experience he’s had playing for the National Development Program and in international play is an enormous asset for him,” said Portland Winterhawks General Manager & Head Coach Jamie Kompon. “We recognize that Caleb had multiple options to play NCAA hockey and we are very excited that he has decided that Portland is where he would like to continue his development.”

“I’m excited to sign with the Winterhawks and continue my development with such a successful organization,” said Jones. “I believe their style of play suits my strengths and I look forward to helping the team pursue a championship in Portland next season.”

Jones is eligible for the NHL Draft this summer, and was rated 115th among North American prospects in NHL Central Scouting’s final rankings.

Jones is the younger brother of former Winterhawk and current Nashville Predators defenseman Seth Jones, who helped lead Portland to the 2013 WHL title. He went on to be selected fourth overall by the Predators in the 2013 Draft. Caleb and Seth are sons of long-time NBA player and current Indiana Pacers assistant coach Popeye Jones.

Group Parties of eight or more people receive the best seats and can save up to $15 per ticket for all playoff home games. Contact the Winterhawks today at 503-236-HAWK or seats@winterhawks.com to guarantee the best seat locations.