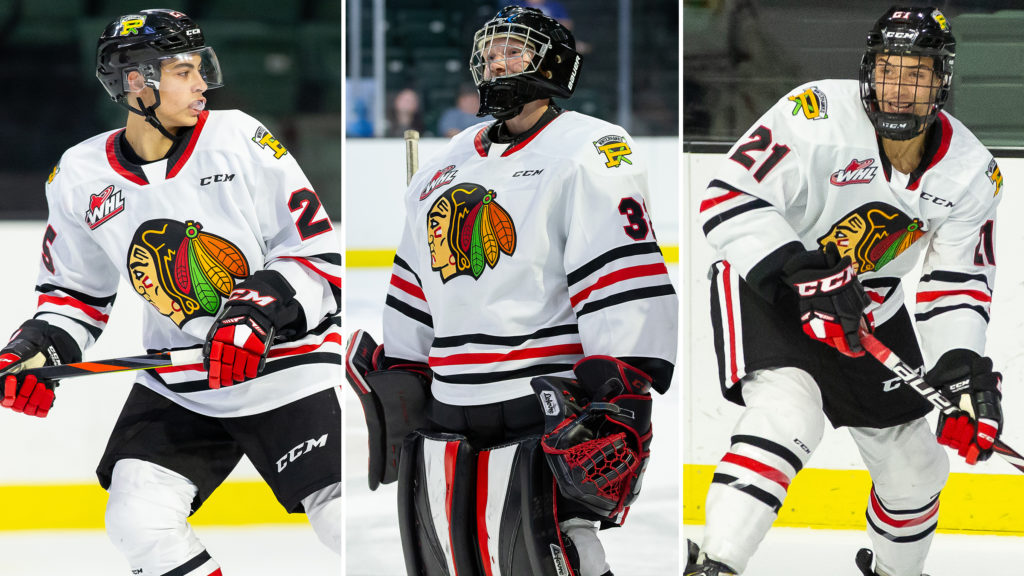 The Portland Winterhawks have reassigned 16-year-old prospects Jonah Bevington, Dawson Pasternak, and Lochlan Gordon to their major midget programs. After the coinciding moves, the Hawks now have 24 players on their active roster for the 2019-20 season.

All three players were with the Winterhawks from the Neely Cup through preseason play. Gordon and Bevington will play this coming season in Edmonton and they were selected first and second overall in Edmonton’s Major Midget selection draft. Gordon will play for South Side Athletic Club AAA, while Bevington will skate with the CAC Canadians AAA program.

Gordon (6-1, 178 lbs.) returned for his second year of WHL preseason action and he said the experience he gained was invaluable.

“The development is just so much better than we have at home at it’s great to be with all the boys and they are also much better players. Neely Cup is always fun and preseason I got in for three fast-paced games,” Gordon said.

Through those three preseason games, Gordon secured his first WHL win and stopped 34 of 40 shots along the way.

“There are a lot bigger players than I’m used to and a lot more net front battles,” Gordon recalled. “I have to be more aggressive while staying calm at the same time so I can see the puck before it’s released. Guys are a lot stronger in the crease.”

Last year, Gordon played 23 games with the CAC Canadians, posting a .902 save percentage and 3.56 goals against average. He represented Team Alberta in net at the 2019 Canada Winter Games after a tremendous showing at the 2018 Alberta Cup.

The former third round WHL Bantam selection is looking forward to developing his game this year to help him make the Winterhawks roster in 2020.

“I’m definitely going to work on some basic stuff to get me to the next level, like skating, tracking the puck, and playing the puck because it’s a lot faster and players pressure harder,” Gordon said. “I just can’t wait to see the future with this team. I’m happy to be with Portland. It’s a great team and a tremendous organization and we’ll see what happens in the next couple of years here.”

Bevington (6-2, 172 lbs.) will join Gordon in the AMMHL this season after participating in his first WHL preseason.

“I think the experience (at the Winterhawks Training Camp) was really good this year,” Bevington said. “I had a lot of fun. It was what I expected and it was good, fast-paced hockey. Sometimes it was a little hard to get used to, but once preseason started I was pretty much used to the speed.”

Through three preseason games, the Yellowknife, NT native was tied for second on the team with three assists and he finished with a plus-3 skater rating. He recorded a multi-assist performance in his first WHL game against Spokane.

“It was a lot different than what I was used to. I was a little nervous, but excited at the same time and I just tried to do my best and keep up with everyone else,” Bevington said.

Almost a point-per-game player in 2018-19, Bevington won the CSSBHL Championship with the OHA Edmonton Elite 15s. He was also one of the top performers for Team Northwest Territories at the 2019 Canada Winter Games, posting three goals and four assists in six tournament games.

“I’m a play-making power forward. When I play my best, I move the puck well and can skate with it to make good plays and set my teammates up,” Bevington said. “Mike (Johnston) wants me to be more physical so I’m going to try and be a physical presence out there and just be a battle guy.”

Pasternak (5-8, 142 lbs.) returns to North Dakota to play another year with the Sioux Falls Power 16U program. The Winnipeg, MB native scored the game-winning, power play goal in his first career WHL game. He played in five of the team’s six preseason contests.

The Winterhawks regular season home opener is September 21st against the Tri-City Americans. Individual tickets are on sale now for all 2019 home games.