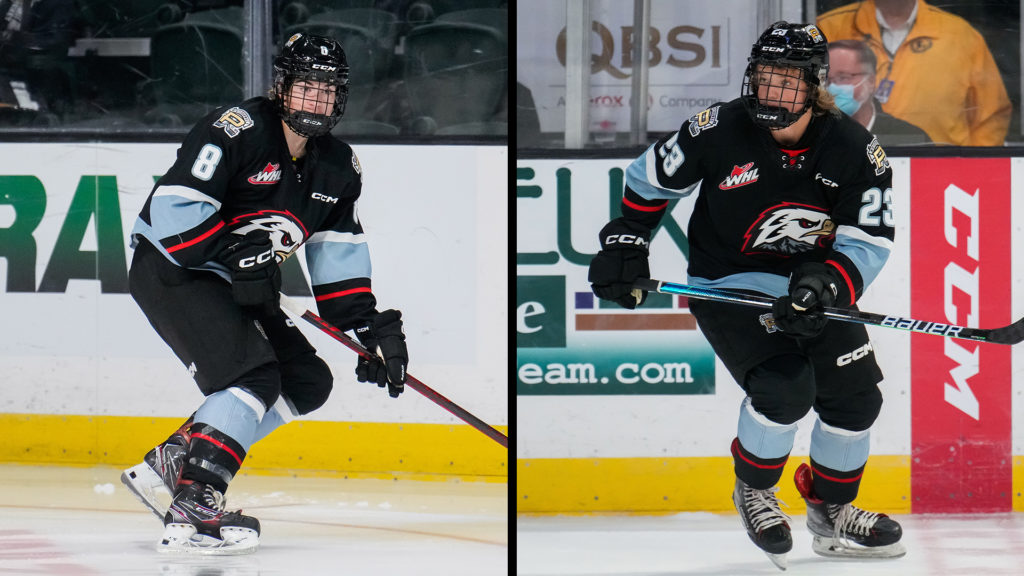 Portland, Ore. – The Portland Winterhawks Hockey Club is proud to recognize prospect forwards Kyle McDonough and Ryan Miller, who were named to Team Alberta’s U16 male hockey team for the 2023 Canada Games.

McDonough, 15, has recorded nine goals and 10 assists for 19 points with the Okotoks Oilers U18 AAA program of the Alberta Elite Hockey League (AEHL) this season. The Langdon, Alta. native was selected by the Winterhawks in the second round, #40 overall of the 2022 WHL Prospects Draft after leading the AEHL U15 league with 36 goals last season, to go with 26 assists and 62 total points. Serving as captain of Okotoks’ U15 AAA club, the 5-foot-8, 146-pound forward posted an additional five goals and nine assists for 14 points in nine playoff contests as well. McDonough earned AEHL 2021-22 Top Forward honors and was named to the league’s First All-Star Team. He signed with Portland on Sept. 8, 2022 following Neely Cup Training Camp, and played one preseason game with the club.

Miller, 15, has posted five goals and eight assists for 13 points in his first year of U18 action, playing 16 games thus far for the South Alberta Hockey Academy in the Canadian Sport School Hockey League (CSSHL). The Medicine Hat, Alta. product was selected by the Winterhawks in the third round, #66 overall, of the 2022 WHL Prospects Draft after he recorded 26 goals and 33 assists for 59 points in 30 games with the Northern Alberta Xtreme U15 Prep team during the 2021-22 season. Like McDonough, Miller signed with Portland on Sept. 8, 2022 after Neely Cup Training Camp, and also logged one preseason game with the Hawks.

Introducing the @TeamABHockey U16 Male squad that will compete at the @2023CanadaGames in PEI!

McDonough and Miller will join Hawks first-round pick Graham Jones, who was named to Team Manitoba earlier this fall, as the second and third Winterhawks prospects confirmed to play in the 2023 Canada Winter Games. Additionally, Callum Stone is currently competing for a spot in Team BC’s camp, with a roster announcement expected later this month.

The Canada Games feature provincial teams from across the country competing in 20 sports every two years, alternating between summer and winter competitions. The 2023 winter games are set for Feb. 18 – March 5, 2023 on Prince Edward Island. Click here for more information about the 2023 Canada Games.