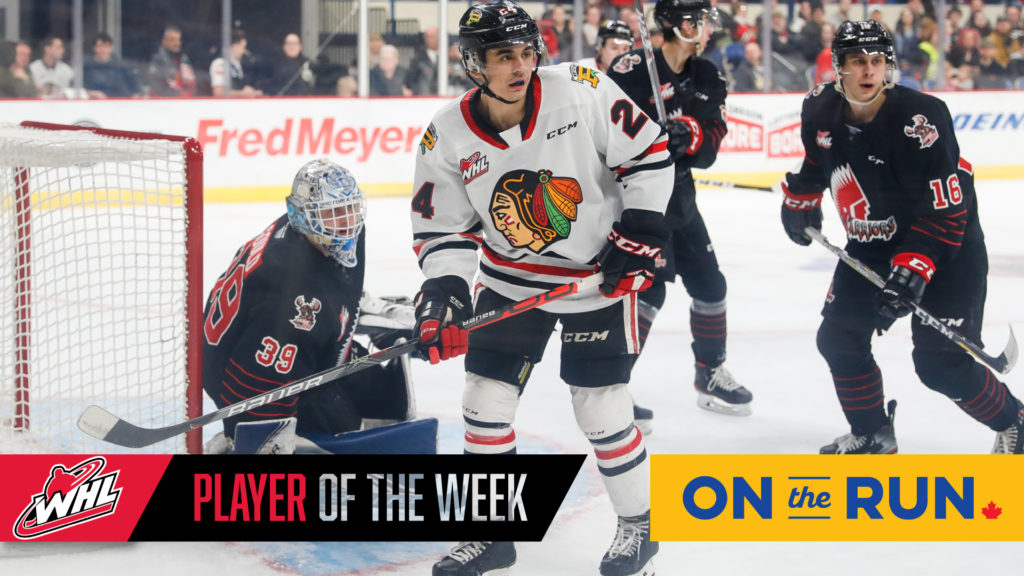 Calgary, Alta. – The Western Hockey League announced today that Portland Winterhawks forward Seth Jarvis has been named the WHL On the Run Player of the Week for the week ending February 16, 2020.

The 2020 NHL Draft prospect recorded nine points (3G-6A) and a plus-five rating across three games as the Winterhawks won twice throughout the week. With a 39-8-3-4 record through 54 games, the Winterhawks continue to lead the U.S. Division, Western Conference, and overall league standings with 85 points.

Jarvis opened his week with a pair of goals and three points in a 4-1 win against the Spokane Chiefs Friday at home. Jarvis scored Portland’s first and fourth goals of the contest, adding a primary assist on the eventual game-winning goal as well. He was named the first star of the game for his performance.

After recording a single assist in a 4-1 loss to the Everett Silvertips, Jarvis and the Winterhawks rebounded with an 11-2 win against the Moose Jaw Warriors Sunday. Jarvis recorded five points in the Winterhawks’ largest offensive output of the season, scoring once and adding four primary assists. The Winnipeg, Man. product scored Portland’s sixth goal, drawing helpers on their second, fourth, seventh, and 11th goals too. He was named the second star of the game and the second star of the night in the WHL for his efforts.

The 5-foot-10, 172-pound forward is leading the Winterhawks this season with 81 points (33G-48A) through 49 games, including eight power-play goals, one short-handed goal, and six game-winning goals. Jarvis ranks third overall in WHL scoring, is tied for the third in goals, and is ranked fifth in assists.

The draft-eligible forward was ranked 19th among North American skaters by NHL Central Scouting in their midterm rankings, which were released last month.

Jarvis and the Winterhawks return to action on Friday, February 21 (7 p.m. PT) when they play host to the Seattle Thunderbirds at the Veterans Memorial Coliseum.