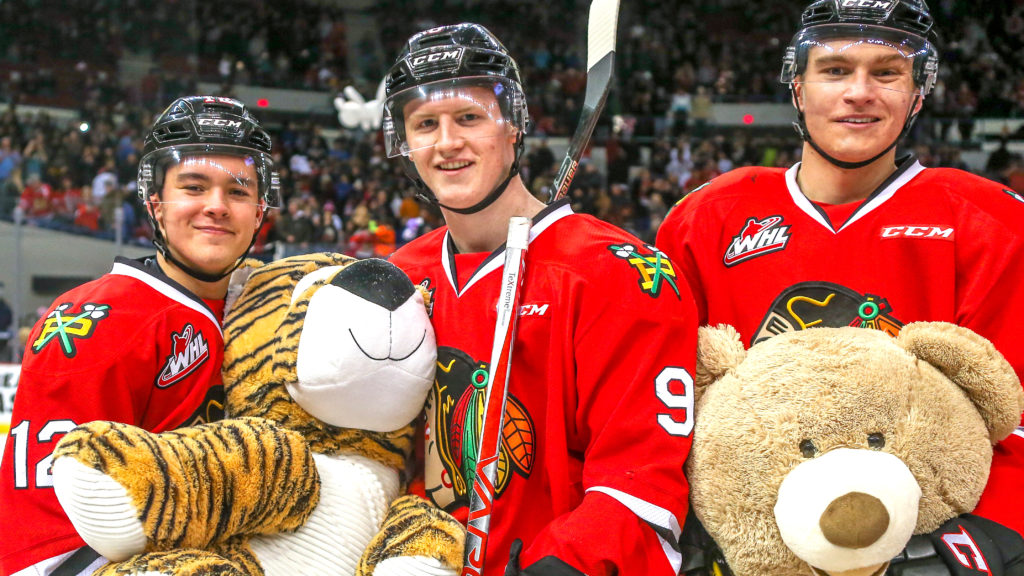 Finally…the Les Schwab Teddy Bear Toss game is here! The Winterhawks welcome the Everett Silvertips to the Veterans Memorial Coliseum tonight. Portland will look avenge their 4-1 loss to Everett on Wednesday. The season series between these two teams in currently split at two games apiece.

McKenzie’s first goal brought down the teddy bears, later adding both a shorthanded and a power play goal to propel the Hawks to victory. McKenzie also tallied an assist for a four-point night.

TODAY’S OPPONENT: The Everett Silvertips come to the Veterans Memorial Coliseum tonight as one of the hottest teams in the WHL. The Silvertips have won seven in a row and are playing their best hockey of the season.

Carter Hart has been the driving force behind Everett’s recent run. The Silvertips’ netminder is 12-3-1-0 on the season with five shutouts. He leads the WHL in goals against average and save percentage. He enters tonight having allowed just five goals over his last seven games.

WINTERHAWKS TO KEEP AN EYE ON: The only two Winterhawks on the current roster to have scored a Teddy Bear Toss goal are Skyler McKenzie last year, and Keoni Texeira back in 2013. For Texeira, it was his first goal in the WHL.

STAT OF THE DAY: The quickest Teddy Bear Toss goal ever was Skyler McKenzie’s marker last season just 2:31 into the first period.

After tonight’s game, Portland is on the road on Tuesday in Spokane. The Winterhawks then return home on Saturday to take on the Chiefs at the VMC. Make sure to grab your tickets HERE!