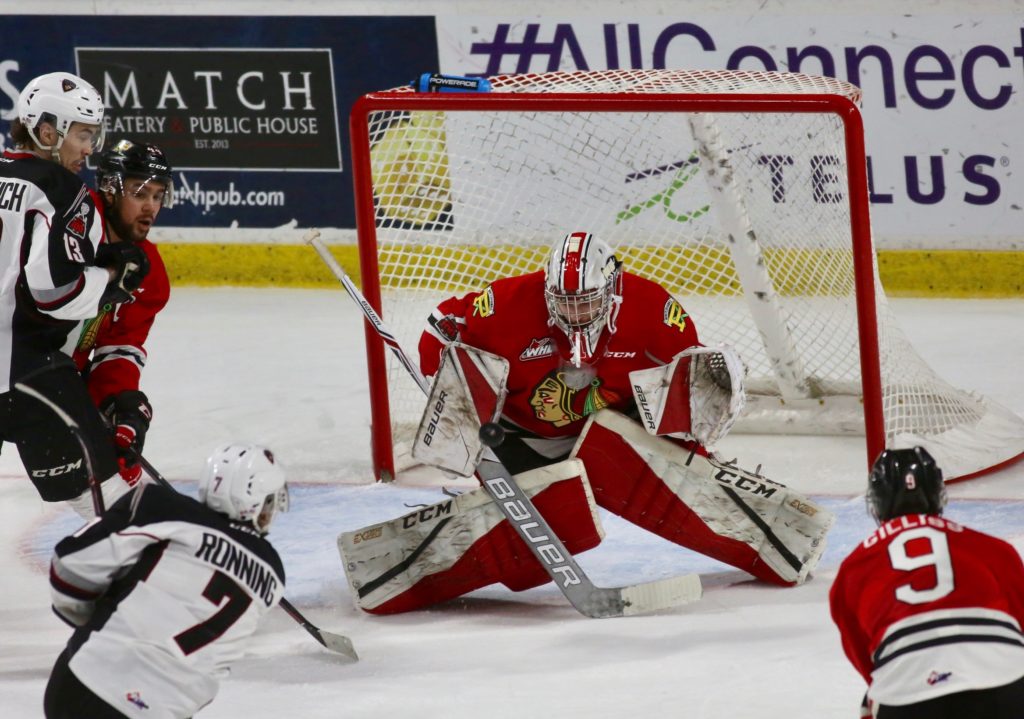 This is the fourth and final meeting between these two teams this season. In their last game, Hawks Shane Farkas came away with his first career shutout in 2-0 Portland win in Langley, BC against the Giants. Portland has won five straight games.

PREVIOUS GAME: Winterhawks 5 vs. Seattle 3: Portland scored three times in the third period to comeback and defeat the Thunderbirds 5-3 at the Veterans Memorial Coliseum on the Jack in the Box Daylight Classic.

Seattle got on the board first on a Dillon Hamaliuk goal just 4:48 into the first period. The Hawks responded shorthanded, with Joachim Blichfeld burying his 19th of the season on a breakaway. Seattle would take the lead again however, with Turner Ottenbreit wiring one home on the powerplay to give the Thunderbirds a 2-1 lead after 20.

In the second, Jake Gricius drove around the net, and with under five minutes remaining, found Lane Gillis infront who potted his fourth of the season to tie things at two. But again, a late powerplay marker from Seattle gave the Thunderbirds a one-goal lead heading into the intermission.

In the third, the Hawks took over. First, Ryan Hughes scored his 11th of the season and fourth in his last five games to tie things at three. Then, on a two-on-one, Alex Overhardt deposited a Blichfeld rebound to put Portland up by one. Blichfeld would then bury an empty-net goal with under a minute remaining for his second of the night and gave Portland the 5-3 win.

Shane Farkas made 19 saves in his fifth win in his last six starts.

TODAY’S OPPONENT: The Giants are coming off a 5-0 shutout loss to the Everett Silvertips on Saturday and have now lost three straight road games.

Vancouver will be without some of their top defenseman tonight due to injuries. The Giants expect defensemen Darian Skeoch, Dylan Plouffe and Matt Barberis all to be out tonight. 15-year-old defenseman and first-round WHL Bantam pick Joel Sexsmith is expected to make his WHL debut tonight.

Forward Ty Ronning has scored 49 goals this season, breaking the all-time single season scoring record for Vancouver. The New York Rangers prospect has seven goals in his last five games, but has scored just once in three games against Portland this season.

Goaltender David Tendeck has played incredible versus the Hawks this year. He’s gone 2-1-0-0 with a 1.35 goal-against-average, a .963 save percentage and one shutout.

Alex Overhardt buried his sixth game-winning goal of the season on Sunday. For Overhardt, nearly half of his 13 goals this season have been game-winners.

Shane Farkas picked up his first career WHL shutout versus Vancouver in Langley back on January 20th. Farkas has been playing great hockey for Portland recently, winning six of his last seven starts and allowing three or less goals in six of those games.

Portland’s next home game is Wednesday, February 21st at the Veterans Memorial Coliseum versus the Kamloops Blazers! Make sure to grab your tickets HERE!