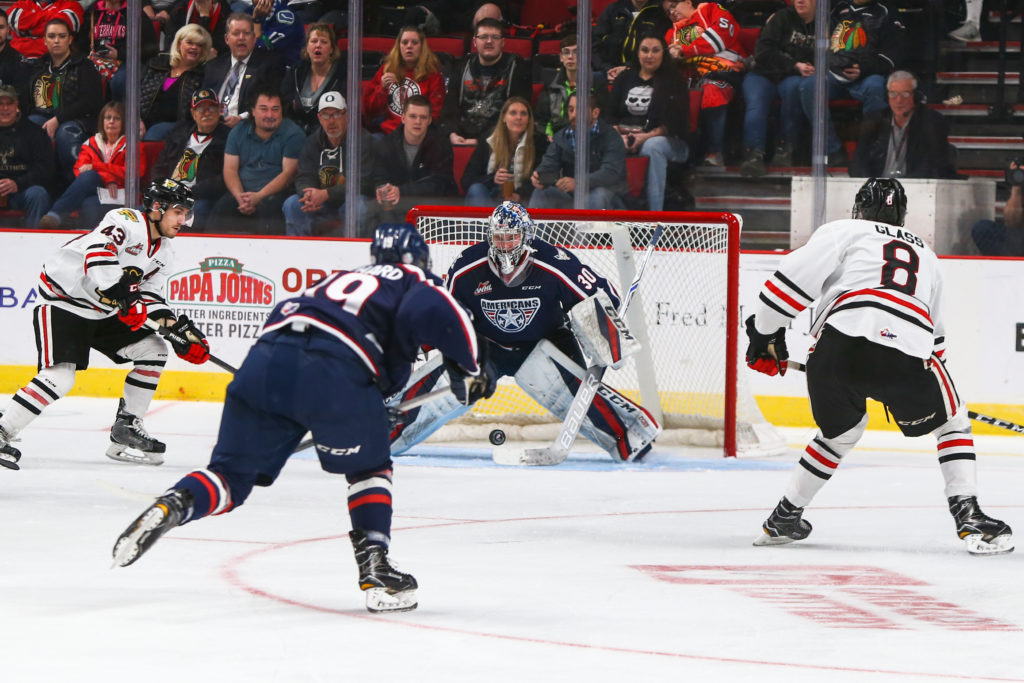 This is the seventh time the Hawks and Americans have met up this season, and third time in the last week. Portland owns the edge in the season series, leading 4-2-0-0 over Tri-City. Portland enters tonight’s contest with five straight wins on home-ice. Tonight’s game features seven NHL first-round draft picks in Glass, Bellows, Cholowski, Jokiharju, Bean, Valimaki and Rasmussen.

PREVIOUS GAME: Winterhawks 8 vs. Royals 5: Portland exploded for eight goals to take down the Victoria Royals 8-5 at the Moda Center on Wednesday.

The Royals took an early 1-0 lead but Portland responded just past the mid-way point of the first on a goal from Conor MacEachern, his first since moving to forward. Cody Glass then gave the Hawks the lead just 41 seconds later, with Skyler McKenzie and Henri Jokiharju picking up assists. Victoria tied things at two 15:25 into the first on a goal from Tyler Soy. But again, Portland took the lead when Mason Mannek batted home a Keoni Texeira point shot to make it 3-2 heading into the first intermission.

The Royals came out firing in the second, with Soy picking up two more for Victoria, registering a hat-trick just over two minutes into the period. Again, the Hawks would come back. Joachim Blichfeld tied things at three at 11:03 on a clean faceoff win from Alex Overhardt. Then, Kieffer Bellows finished off a nice-passing play with Skyler McKenzie and Cody Glass to give Portland a 4-3 lead.

In the third, Victoria would tie things up on a two-on-one goal from Matthew Phillips. But Ryan Hughes would score on a howitzer from just inside the blueline to give Portland the lead once again, 6-5. Bellows would bury his second of the night on another feed from Glass. McKenzie would then ice it with an empty-net goal, his 40th marker of the season, to make it an 8-5 final. Cole Kehler made 23 saves in the win.

Henri Jokiharju, Alex Overhardt and Joachim Blichfeld would all reach 100-career points on the night.

TODAY’S OPPONENT: The Americans enter tonight’s game losers of two straight, but had won four straight prior to their pair of losses. Tri-City has struggled on the road as of late, they are just 2-5-2-1 over their last 10 road games. The Americans are 1-2-0-0 so far this season in Portland.

Against the Hawks, forward Isaac Johnson leads the way with five goals in six games. He also has seven points, which tied Morgan Geekie for the most against Portland this season.

WINTERHAWKS TO KEEP AN EYE ON: Kieffer Bellows enters tonight’s contest on an eight-game point streak. During that span, Bellows has 10 goals and 17 points. On the year now, the New York Islanders first-round draft pick has 28 goals in 38 games and is averaging 1.45 points-per-game.

Cody Glass is on a seven-game point streak. Over that span, the Vegas Golden Knights prospect has three goals and 13 points. Glass has been held off the score-sheet just two times in his last 16 games. Overall, Glass’ 46 assists on the season are tied for 9th most in the WHL.

Defenseman Henri Jokiharju has been on a roll since returning from the World Junior Championship. Over 14 games since the WJC, the Finnish d-man has 14 assists and 15 points. His 52 points puts him 5th in the WHL among defensemen and his 44 assists are four most among d-men. The Chicago Blackhawks first-round pick is averaging 1.16 points-per-game, good for 3rd most in the WHL among defensemen. Jokiharju has already eclipsed his career high point total of 48, which he posted last season.

Skyler McKenzie reached the 40 goals plateau on Wednesday and now sits 5th in the WHL in scoring. Since the beginning of January, McKenzie has been one of the league’s best players, producing 13 goals and 26 points in 17 games. He is currently on an eight-game point streak, and has 12 points and five goals over that span. He sits two goals off his career high of 42, which he posted last season.

Portland’s next home game is Sunday’s Jack in the Box Day Light Classic against the Seattle Thunderbirds! Make sure to grab your tickets HERE!