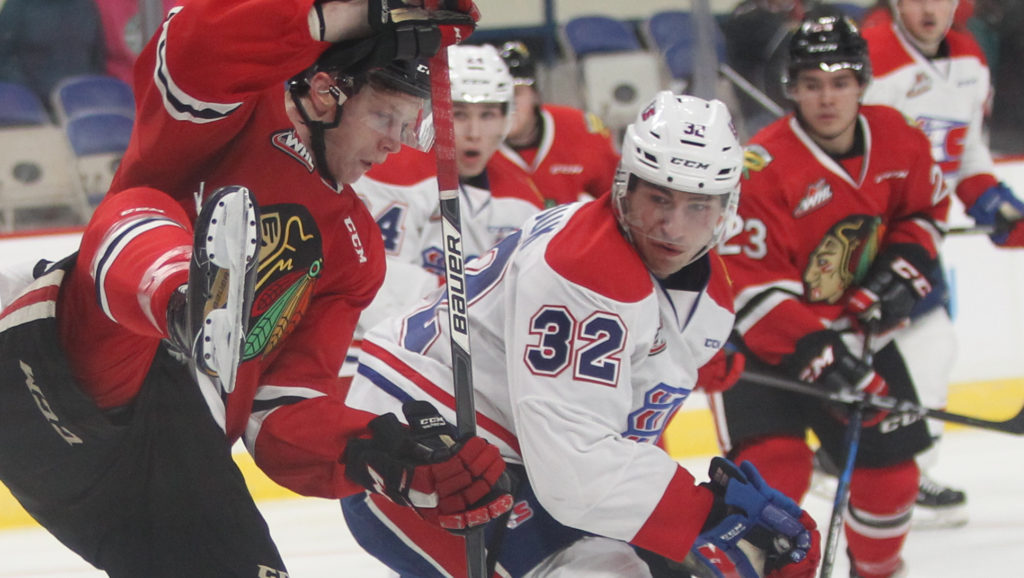 PREVIOUS GAME RECAP: The Winterhawks continued their strong play against Spokane this season, improving to 5-0-0-0 against the Chiefs this season, in a 4-2 win on Tuesday.

Spokane (16-11-1-2) got on the board first scoring 14:41 into the opening frame to take a 1-0 lead into the second period. But Portland (21-9-0-1) would rally in the second. Joachim Blichfeld buried a rebound mid-way through the period. Then, Kieffer Bellows created a turnover and beat the Chiefs netminder Donovan Buskey on a breakaway for his 19th of the season. The Chiefs would respond with a goal from Kailer Yamamoto to tie things at two after 40 minutes.

In the third, Keoni Texeira nominated himself for “Goal of the Year”. The Winterhawks captain went through several Spokane players and potted his 6th of the season to give Portland a 3-2 win. The Hawks would add an empty-netter off the stick of Blichfeld, his second of the game, to make it a 4-2 final.

Goaltender Cole Kehler was solid all night and ended up with 30 saves in the win.

TODAY’S OPPONENT: The Spokane Chiefs enter tonight’s game against Portland coming off a 5-3 win over the Everett Silvertips last night, snapping a Everett nine-game winning streak. Spokane has been solid on the road this season, going 8-5-1-0 on the year, good for second best road record in the U.S. Division.

The Chiefs have struggled against Portland this season, going winless in five contests against the Winterhawks. They’ve been outscored 24-6 in those five games. The Chiefs haven’t had much success against the U.S. Division in general, posting a 4-8-0-1 record against within their division.

The Chiefs enter tonight’s game with the 8th most goals-per-game in the WHL. Leading the way offensively for Spokane is Hudson Elynuik, who has 44 points in 32 games. The Carolina Hurricanes draft pick had a goal and an assist in the Chiefs 4-2 loss to Portland on Tuesday. Donovan Buskey made 25 saves in a losing cause against Portland. Buskey got the start last night against Everett and made 23 saves for his 6th win of the season.

With Kyler Yamamoto away at Team USA’s World Junior training camps, 15 year old Jack Finley, Spokane’s first round pick this past Bantam draft, made his WHL debut last night. The Kelowna, BC born Finley, was the 6th overall pick in May and registered two shots last night against Everett.

WINTERHAWKS TO KEEP AN EYE ON:  Cody Glass is expected to return to Portland’s lineup tonight after missing Tuesday’s game while at Team Canada’s World Junior training camp. Glass is Portland’s leading scorer with 48 points on the season.

The Winterhawks will be without Kieffer Bellows, Joachim Blichfeld and Henri Jokiharju, so expect to see a unique lineup tonight. One of Connor Bowie, Jaydon Dureau or Seth Jarvis will also likely make their WHL debut.

Skyler McKenzie leads all Winterhawks with nine points in five games against the Chiefs this season. Keoni Texeira has scored three of his seven goals this season against Spokane.

STAT OF THE DAY: The Winterhawks are 6-0-0-0 when Keoni Texeira scores this season.

The Winterhawks are on the road tomorrow to take on the Silvertips in Everett. This is the Winterhawks last game before the Christmas break. Portland returns home on December 27th to faceoff with the Tri-City Americans at the Veterans Memorial Coliseum. Make sure to grab your tickets HERE!