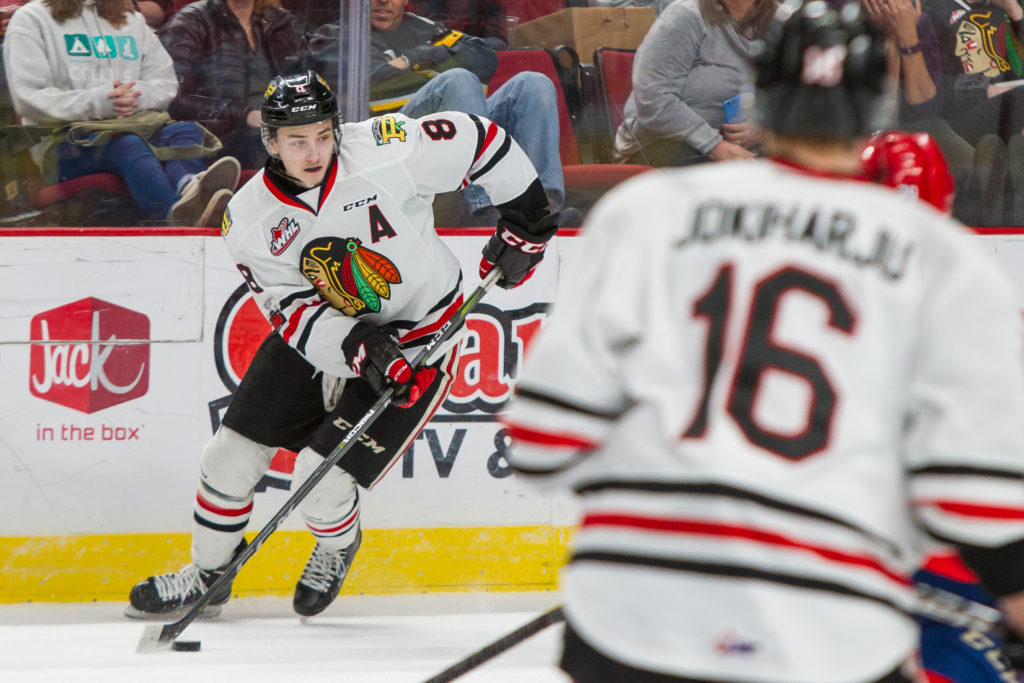 Game 7. It’s come down to just one game for the Hawks and the Chiefs. Spokane came away with the victory in Game 6, forcing a winner take all matchup tonight at the Veterans Memorial Coliseum.

PREVIOUS GAME: The Hawks couldn’t quite overcome a tough start, and ended up falling 5-2 to the Chiefs on Monday night in Spokane. With the Chiefs victory, the best-of-seven series is now tied at three, with Game 7 tomorrow in Portland.

After an evenly matched opening 15 minutes, the Chiefs scored twice in 14 seconds with just over three minutes left in the first period to go up 2-0 after 20 minutes.

In the second, Portland got back within one, with captain Keoni Texeira dancing around Nolan Reid and finding Mason Mannek in the slot, who beat Dawson Weatherill. For Mannek, it was his third goal of the playoffs. The Chiefs would respond, with Ty Smith beating Cole Kehler on a three-on-two to give Spokane their two-goal lead back. Then, on the powerplay, Ethan McIndoe fired home a shot to make it 4-1 Chiefs after 40 minutes.

Portland would come out firing in the third, with Henri Jokiharju sniping a wrister past Weatherill to get Portland back within two. The Hawks would press for the remainder of the period, outshooting the Chiefs 13 to 3, but Weatherill stood tall for Spokane. Luke Toporowski would score one late, to eventually make it a 5-2 final. Cole Kehler had 22 saves on the night.

TODAY’S OPPONENT: Defenseman Ty Smith was all over the ice last night for Spokane. The potential Top-10 pick in the upcoming NHL draft, had a goal and an assist in the Chiefs 5-2 victory. He also di an excellent job shutting down the Hawks number one unit, holding Bellows, Glass and McKenzie to just one point combined.

Dawson Weatherill had his best game of the series. The 98-born goaltender made 31 saves and allowed just two goals on the night. Weatherill was particularly good in the third period, when Portland made it a two-goal game, and were playing their best hockey of the game. Weather came up with several big saves to keep the Chiefs in front by two.

Spokane has received some timely secondary scoring in this series from Eli Zummack and Luke Toporowski. Zummack picked up his second goal of the series off a tip in the first period to make it a 2-0 lead for Spokane. Toporowski scored his first goal since his overtime winner in Game One, in the third period of Game 6, to give Spokane a 5-2 lead. Both players also have more than four points in the series.

WINTERHAWKS TO KEEP AN EYE ON: Henri Jokiharju fired home his second goal of the postseason in the third period of Game 6. Jokiharju now has six points in the series, third most on the Hawks, and has recorded 23 shots in the series.

Mason Mannek continued his excellent series yesterday, recording his third goal of the playoffs. Interestingly, Mannek has taken just four shots total, scoring on three of them. Keoni Texeira, who set up Mannek on his goal last night, now has three assists in the series, and is a team high plus three.

Texeira is also the only Winterhawks player to play in a Game 7 in the WHL. That game was during the 2013-14 WHL Finals against the Edmonton Oil Kings.