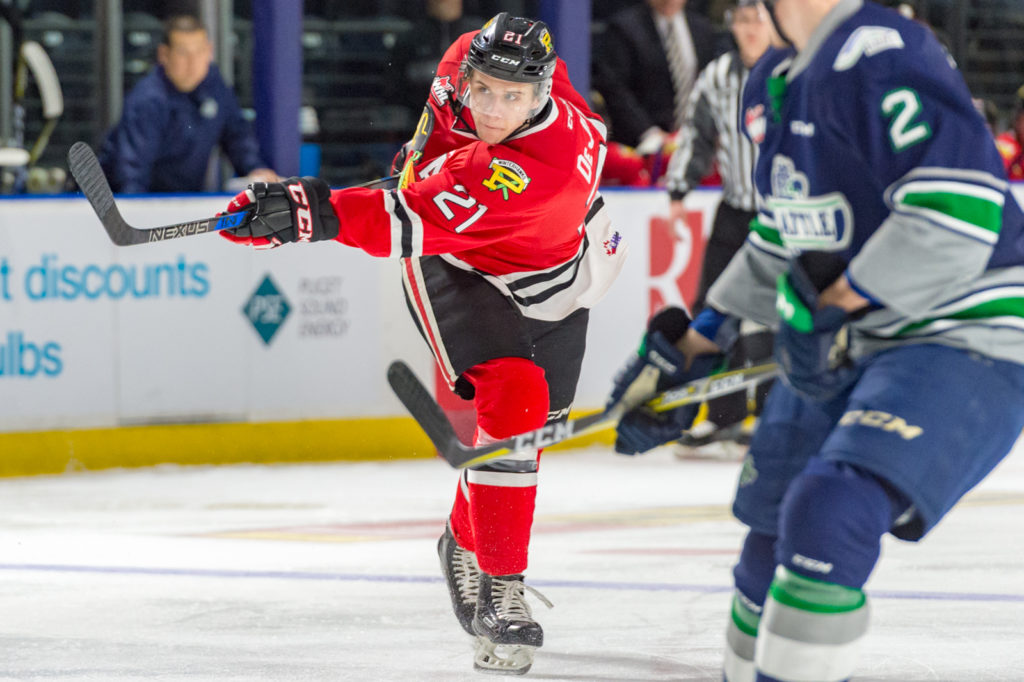 Tonight’s game is the Jack in the Box Daylight Classic! Hawks and Thunderbirds faceoff for second time is as many nights. Portland got the better of Seattle last night in a 4-1 win in Kent, WA. The Winterhawks now lead the season series 5-0-1-1 and have won three straight versus the Thunderbirds. Portland has won six straight on home-ice and four straight overall.

PREVIOUS GAME: Winterhawks 4 at Seattle 1: Cole Kehler made 28 saves to lead Portland to a 4-1 win over the Seattle Thunderbirds on Saturday.

After scoreless opening frame, Cody Glass buried a Dennis Cholowski feed on a two-on-one to make it  1-0 Portland. Just over seven minutes later, Ryan Hughes set up Keoni Texeira on a gorgeous play and the Hawks captain wired home his eighth of the season. Hughes wasn’t done there. Just as a Hawks powerplay expired, it was Texeira this time teeing up Hughes who put a slapshot past Seattle goaltender Liam Hughes. The Hawks entered the second intermission with a 3-0 lead.

In the third, Seattle picked up their first of the game on a goal from Graeme Bryks to make it a two-goal game. But it was all Cole Kehler after that, making several saves to keep the lead at two. Skyler McKenzie would add an empty-net goal to make it a 4-1 final. Portland improves to 34-18-1-3 on the season.

TODAY’S OPPONENT: Entering tonight’s contest, Seattle finds themselves in a bit of a skid, losing four of their last five games. The Thunderbirds have also lost three straight road games. They currently sit 5th in the U.S. Division but are safely holding the second wild-card spot in the Western Conference.

Donovan Neuls has had the most success against Portland this season, posting seven points in just six games. Neuls leads the Thunderbirds in scoring with 57 points in 54 games.

Leaving yesterday’s game in a scary moment was the Thunderbirds second leading scorer, Nolan Volcan. Volcan took a puck to the side of the head on a point shot and had to leave the game. With Sami Moilanen missing last night’s game with an injury, Seattle fans, and everyone else for that matter, is hoping the Volcan injury is nothing serious.

Liam Hughes allowed three goals in last night’s Seattle loss. Hughes has had a good season for the Thunderbirds, but has struggled a bit versus Portland. He has just a 3.82 GAA and a .887 SV%.

WINTERHAWKS TO KEEP AN EYE ON: The entire Hawks penalty-kill has been playing excellent hockey. Portland has allowed just one powerplay goal in their last six games and have held opponents to 1/21 with the man-advantage during that stretch.

Cody Glass extended his point streak to nine-games last night and now has four goals and 15 points during that span. The Vegas Golden Knights drafted pick has 12 points in six games versus Seattle this season.

Who should start in the net for the Hawks? Right now for Portland, there isn’t a wrong answer. Shane Farkas has been playing some of the best hockey of his career, winning five of his last six starts, while allowing two-or-less goals in four of those games. While Cole Kehler has dominated Seattle this season, going 3-0-1-1 and with a 2.30 GAA and a .916 SV%.

STAT OF THE DAY: After getting a goal last night, Portland is now 16-5-0-1 on the season when Cody Glass scores.

Portland’s next home game is Wednesday at the Veterans Memorial Coliseum versus the Vancouver Giants! Make sure to grab your tickets HERE!