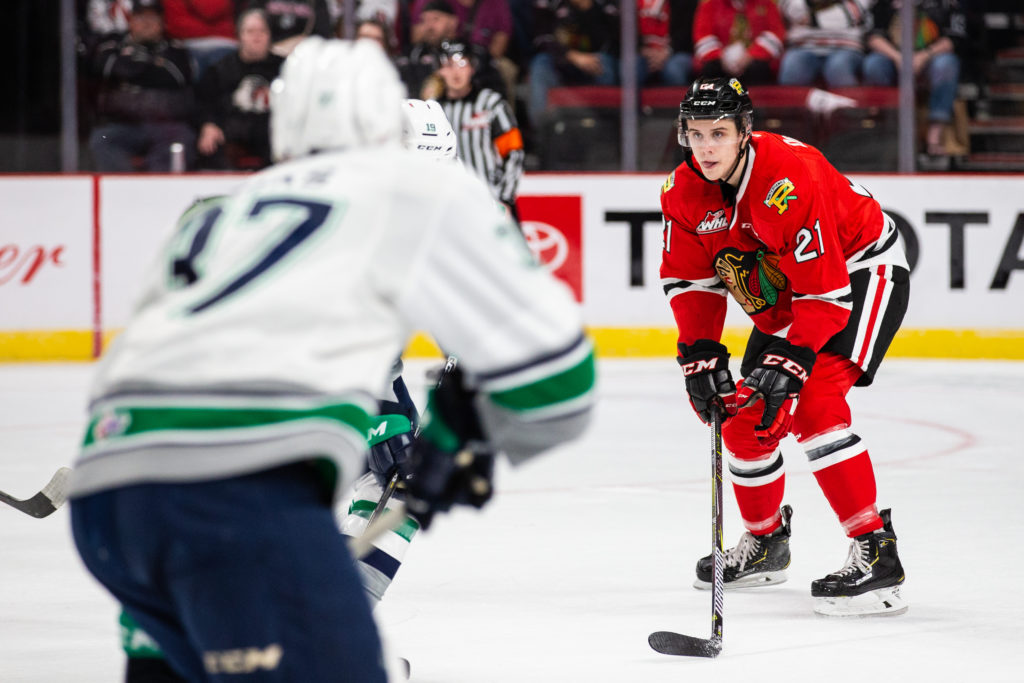 The Portland Winterhawks wrap up their regular season slate against Seattle tonight. With Portland losing on Saturday and Spokane winning 10-1, the Winterhawks must win tonight to clinch home ice in the opening round starting March 22.

Be sure to arrive to the game early tomorrow and get in your seats for the annual Winterhawk awards taking place during the pregame festivities. Also, season ticket holders, this is the final chance to redeem any extra tickets you may have banked. Those tickets will not roll over to playoffs.

PREVIOUS GAME – Winterhawks 2 at Thunderbirds 5: Portland brought the game to a one-goal deficit in the third period, but the Seattle Thunderbirds captured a 5-2 win in their final home game of the regular season.

The Thunderbirds opened the game with three unanswered goals, including goals the opening minute of the second and third periods. Portland would not go down without a fight.

In seek of another comeback victory against Seattle, Portland outshot their rival 23 to 9 in the third period and scored a pair of goals to make it a 3-2 game. The Hawks first goal came from Jared Freadrich on a 5-on-3 power play.

With emotions high, Seattle scored an insurance marker with under five minutes to play and eventually an empty net goal to secure the win.

Twenty year olds Noah Phil (2G, A) and Nolan Volcan (G) each had points in their final regular season home game at the ShoWare Center.

Seattle has been as hot of a team as any in the WHL, winning five of their last six games and sending the 20 year olds home with a win in the final home game of the regular season. The 5-2 win on Saturday night also ended the Thunderbird’s seven game losing skid against the Hawks.

The scenario for the Winterhawks is simple. Win and finish second place in the division or lose and finish third behind Everett and Spokane. Matthew Wedman scored his 40th goal of the season last night, becoming the first player since Prab Rai did it with the Thunderbirds in 2009-10. Noah Philp reached 75 points last night and now has five goals and eight assists for 13 points in eight March games. He had two goals and an assist on Saturday night. That’s the ninth time this year he recorded at least three points in a game.

Roddy Ross collected his fourth 40+ save outing in his last seven starts. He was one save shy of tying his career high. Following Seattle’s home win, there was quite a bit of chatter about the coaches possibly resting some players for the regular season finale.

Regardless, the focus on the game is playing a full 60 minutes. Portland heavily outplayed Seattle in the third period last night and will need to carry that momentum into the next game. Tonight is also the last regular season home games for Brendan De Jong, Joachim Blichfeld and Jared Freadrich. The three players have combined for 845 games in their career.

Catch up on a lunch-time read as Josh Critzer of DubNetwork chats with Brendan De Jong and Seattle captain Nolan Volcan on this rivalry: click here to read.

Special teams came through again on Saturday. On the season, the Hawks are 15/51 (29.4%) on the man advantage against the Thunderbirds. Join the Hawks this evening and come out loud to the VMC ready to battle with Seattle. The weekend game will be televised on Portland’s CW and Sunday’s home game will start at 5:00 p.m. to conclude the 68-game regular season schedule. Please visit winterhawks.com/tickets for full details on pricing and availability.